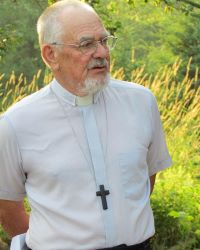 Please share a memory of Donald to include in a keepsake book for family and friends.
View Tribute Book

Donald left his earthly home and journeyed on to Glory on the morning of November 15th at Soldiers Memorial Hospital, Middleton with his family surrounding his bed. His friend and fellow priest was there and as he gave him the blessing, Donald nodded and breathed his last. He was born on Easter Monday morning, April 21, 1930 the son of the Rev. Robert and Muriel Neish. He began his education in the one room school in the community of Seaforth, Nova Scotia, where his father was rector. He went on to Kings College School, Windsor for high school. He began University after grade 11 and received his undergraduate Art’s degree with honours from the University of Kings College Halifax and continued on to study Theology at Kings and graduated with his BSLitt degree. He also received his BD (General Synod) and was the first Kings graduate to receive the degree with First Class Honours. He was ordained as a Deacon at Kings Chapel on March 25 and later that year ordained Priest in Holy Trinity Country Harbour Mines on the feast of St. Andrew in 1954. He would have celebrated the 68th anniversary of his Priesting this year. His parish ministry began in Antigonish and Country Harbour then on to the parish of Elora and then Christ Church St, Catherines in the Diocese of Niagara. He then returned to Nova Scotia to the parish of Emmanuel, Spryfield. His last parish was The Church of the Holy Spirit, Dartmouth where he served for 20 years. He was named a Canon of the Cathedral in 1991. He married Sarah Myers in 1960 and they have been blessed with four children Andrew (Laura), Mary (Kevin), Adam (Joan) and Monica (Kip). His eight grandchildren were the joy of his life. Donald was a renaissance man with eclectic tastes in music, reading, single malt scotch and fine Nova Scotia wines. He could listen to Cape Breton fiddle tunes, Dixie Jazz, Baroque cello and a bit of Mahler. Donald was a proud Scot, he served as President of the North British Society for 3 years. He loved the game of golf, never mastered the swing but could be deadly on the putting green. His love of sports drew him to Baseball as a young boy listening to the Brooklyn Dodger games late into the night and he remained a Dodger fan until his death. His love of sports continued with Toronto Maple Leafs and the Saskatchewan Rough Riders, and he had the tee shirts to prove it. He became an Associate of The Order of The Holy Cross in 1962 and followed their rule of life for the next 60 years. His funeral will be held at St. Luke’s Anglican Church, Annapolis Royal, Friday, November 18, 2022, at 2:00p.m. where he was Honorary Priest Associate with the Right Rev. Bishop Fyfe, Rev. Canon Ken Vaughan and Rev. Juanita Barteaux officiating. There will be a Requiem Eucharist and clergy are invited to robe (liturgical Colour, white).

A reception will follow the service and the committal will follow at Christ Church Cemetery, Karsdale where he will join with other generations of his family. Family flowers only. Donations in Donald’s memory may be sent to the Parish of St. Luke’s or to the PWRDF. On line condolences may be sent at www.kaulbachfamilyfuneralhome.com

Share Your Memory of
Donald
Upload Your Memory View All Memories
Be the first to upload a memory!
Share A Memory