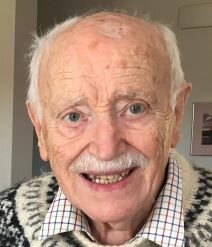 Please share a memory of Richard to include in a keepsake book for family and friends.
View Tribute Book
Palmer, Richard “Dick” Charles - 90, Granville Ferry, NS. July 25, 1931 – September 6, 2021. Passed away peacefully in the Annapolis Community Health Centre, Annapolis Royal. Born in London UK to Emily Victoria Pullen and Harry Palmer. Dick was a child evacuee during the war. After the Second World War he served in the Royal Air Force. He moved to Toronto in his early 20’s and worked in insurance for many decades; working his way to vice president. Hobbies included photography, angling and wintering in Florida where he volunteered at Audubon Corkscrew Stamp Sanctuary, guiding tourists around the boardwalk, pointing out wildlife. In Toronto he volunteered with “Bring Back the Don River” planting trees. At age 88, he moved to Nova Scotia from Toronto to be with family for his remaining time. He enjoyed visits with their friends, meals out, driving explorations, chair fitness classes and seaside walks. He was predeceased by his wife of 63 years, Barbara Palmer; and by his sister, Joyce Lawrie. He is survived by daughter, Julie Palmer and son-in-law, Robbie Bays, Nova Scotia; his brother, John Palmer, nephews Paul, Dicky and Chris and niece Jill, all in UK. Many thanks to his wonderful caregivers over the last few years and to the excellent staff at the Annapolis Community Health Centre. Donations in memory may be made to Nature Canada or Annapolis Community Health Centre, Annapolis Royal. To send condolences please visit www.kaulbachfamilyfuneralhome.com
Share Your Memory of
Richard
Upload Your Memory View All Memories
Be the first to upload a memory!
Share A Memory