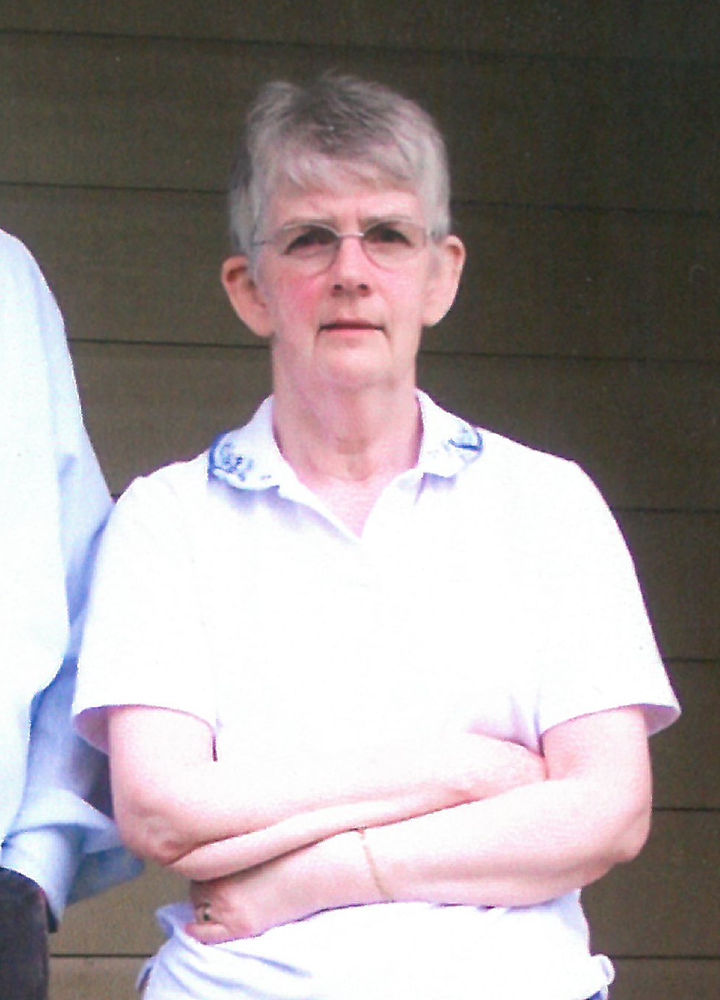 Cameron (McMullin), Mary Annette “MRS C” – Granville Centre, Died Nov.5, 2020 in Soldier’s Memorial Hospital, Middleton, NS while holding hands with her beloved husband, Doug. Suddenly of Cancer. Born Oct 6, 1946. Eldest child of the late Francis and Viola (Walsh) McMullin of Cooney’s Lane, Dominion, CB. Grade 11 , MacDonald High School, Dominion, CB, 1963: Xavier College, Sydney, NS 1966; St. Francis Xavier Univ. BA (Hist.) 1968 and B. Ed. 1969; Parks Canada summer guide, Port Royal Habitation, 1967; Fort Anne, Annapolis Royal, 1968. While at Xavier one of Dr. Robert Morgan’s early recruits in the restoration of the Old St. Pat’s Church and graveyard. While at both Xavier and STFX a major contributor to the costume dept. of their drama clubs. While a summer guide, an early member of the Annapolis Royal Historical Society and its restoration of the O’Dell House. Taught twenty- eight years at Annapolis Royal Regional Academy, and then Annapolis West Education Centre, Annapolis Royal, NS. Taught mainly Grade 10 and Grade 11 Academic History. In later years also taught General History courses and even a few English Courses. In later years respectfully called “MRS C” by her students, every one of whom she remembered in considerable detail. (She really did!) Active for many years in the Annapolis Local – NSTU, including 14 years as a school rep, Member of 5 local negotiating committees including the one in 1983 that amalgamated the 4 Annapolis County teacher contracts following the first school board amalgamation. Also Annapolis Local President, 1987 – 1989. Following her retirement became an avid member of Bird Studies Canada Project Feederwatch. Travelled to most of Nova Scotia’s parks, enjoying their hiking trails, wildlife and scenery. Enjoyed reading historical novels, especially historical mystery novels, which she recommended to anyone who asked what she was reading. She also did a huge number of her plastic canvas crafts, which she gave to family and friends as presents, and a number of local charitable organizations as fundraisers. A wonderful personality and a great ability to listen led everyone to talk to her, her husband, family, friends, teaching colleagues, former colleagues, students, former students, students she had never taught, parents of former students, they all willing confided their triumphs and tribulations of her both during her teaching career and during her retirement. Fortunately for her, much more fortunately for him, the colleague she began dating soon after beginning her teaching career at ARRA, proved to be someone to whom she could confide her triumphs and tribulations. She was married to Doug, on Sat, July 18, 1970, 9 months to the day after their first date, on which she gave him a guided tour of the Habitation. On many of the last days of her life she engaged in her two great loves, teaching and helping her husband. In typical fashion, she combined her two loves by trying to teach her husband how to cook many of the meals and baked goods she had made for him over the years. On the morning of the day she entered the hospital, she taught him how to bake Cape Breton Scones. Survived by husband, Douglas; sister, Cathy Algee (Boyd), Dartmouth; brothers, Rod (Carol), Kanata, ON; Brooks (Kathy), Prince Albert, Sask.; various cousins, nieces and nephews. Special thanks to all the doctors and nursing staff at Soldier’s Memorial Hospital, both in the emergency department and on both units of the third level, who looked after her during the last two weeks of her life. Without exception they were competent and professional; equally importantly they were also kind, caring, and compassionate. Special thanks to Dr. McGuire and Dr. Surette. Her remains have been cremated under the care and direction of the Kaulbach Family Funeral Home. Visitation will take place 7-9pm Wednesday, November 11, 2020 from the Kaulbach Family funeral Home, Annapolis Royal. There will be no funeral service. Private burial at a later date. In lieu of flowers (her scents allergies) donations may be made to the Nature Conservancy of Canada or The Nova Scotia Nature Trust. If making online condolences please include an actual post office return mailing address. Both MRS.C and Mr. Cameron are Luddites. Online condolences may be made at www.kaulbachfamilyfuneralhome.com
Share Your Memory of
Mary
Upload Your Memory View All Memories
Be the first to upload a memory!
Share A Memory