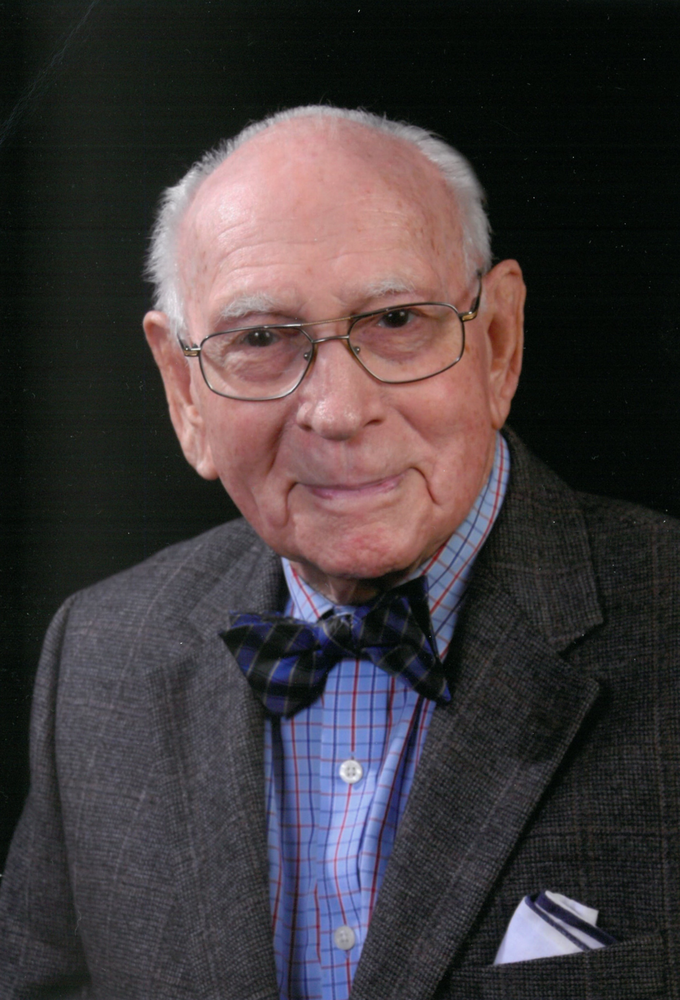 Please share a memory of George to include in a keepsake book for family and friends.
View Tribute Book
ALLEN, Rev Dr. George Pilkington — 107, Crosskill Court, Bridgetown, formerly of Clementsvale, passed away on September 17, 2020, in the Veteran’s Wing, Soldier’s Memorial Hospital, Middleton. Born in North Sydney on March 21, 1913, he was the son of the late John Herman and Rowena (Pilkington) Allen. He attended and graduated from Regent Street High School, North Sydney, and in 1940 graduated from Acadia University and Acadia School of Theology where he was active in student affairs and served as President of the Acadia Students’ Union. During his time at Acadia, he made his first trip to Clementsvale as a student minister where he met June Elizabeth Sanford. They married on September 30, 1940, spending nearly 71 years together until her death in 2011. He was a force of nature: strong of faith, kind of heart, and most of all generous of spirit. In vocation and in life, he lived to serve others with grace and compassion. There is no measure to the number of people he inspired and the lives he touched, in many small and significant ways. An ordained Baptist minister for 79 years, he began his ministry with the United Baptist Mahone Bay Pastorate in 1940. At the time, the pastorate consisted of six churches; Mahone Bay, Northwest, Indian Point, New Cornwall, Upper Cornwall, and Hermans Island. He later would serve in Baptist pastorates in Tufts Cove, Canard (First Cornwallis Baptist Church), Truro ( First Baptist Church), Dartmouth, (Steven’s Road), and Bridgetown, from which he retired in May of 1984. Following retirement, he remained active supplying churches in Clementsvale, Bear River, Bear River East, Digby, North Range, Rossway, and Hillgrove. Throughout his prolific ministry his service extended to many committees and institutional bodies including the Home Mission Board of the United Atlantic Baptist Convention (UABC), the Committee on Rural Life, the Radio and Television Committee, the Board of Stewardship, and Acadia’s Board of Governors. In 1958, he was elected President of the Atlantic Baptist Convention. During his many pastorates he served as Moderator in several Baptist Associations and as Chairperson of numerous committees. His contributions were further recognized when he was awarded an Honourary Doctor of Divinity degree from Acadia Divinity College in 1968, and pastor emeritus distinctions for both Clementsvale Baptist and Bridgetown Baptist Churches. Ministry was never just a profession for George. He approached it as a way life. Long after his retirement, he continued his ministry with the residents of Crosskill Court whom he viewed as family, sharing their joys and sorrows and officiating services in their common room. Above all, he endeavoured to share hope and love with everyone he met. He made it a priority to form meaningful bonds in the towns and communities where he lived and ministered. George served as President of the Colchester County Tuberculosis Association and a Director of the Colchester Children’s Aid Society, as well as a member of the Provincial Allied Youth Sponsoring Committee, Red Cross, and Boy Scout Group committees. In 1984, he was elected a life member of the Canadian Red Cross. He was honoured by the Clementsvale and District Recreation Commission in 2007 with the opening of the George Allen Family Park in Clementsvale. In his later years he enjoyed attending the meetings and being the song leader of the Order of Good Cheer. He is survived by sons, David (Joyce), Mahone Bay; Paul, Debert; John (Pamela), Kensington, P.E.I.; daughter, Mary (Lawry) MacLeod, Oxford; grandchildren, Janet, Jennifer, Emily, Ben, Thomas, and William; great-grandchildren, Owen, Aislin, and Isabella; as well as nieces, nephews and grand nieces and nephews. Besides his parents and wife, June, he was predeceased by brothers, Eastwood and Herman, and sisters, Cora MacDonald, Mary Dick, and Mabel Warren. Family members would like to extend special thanks to the staff of Crosskill Court, and the doctors and nurses of Soldier’s Memorial Hospital and for their tender care and compassion during George’s last months. Cremation has taken place. There will be a public visitation, 6-8pm Monday, September 28, in the Kaulbach Family Funeral Home, Bridgetown. Covid-19 restrictions will apply. A private family funeral service will be held 2pm Tuesday, September 29, 2020 from the Kaulbach Family Funeral Home. The service will be live streamed on the Funeral Homes website, on Georges obituary page under the tab Webcast, starting at 1:45pm. A family committal service will take place at the Clementsvale Cemetery at a future date. Family flowers only. Donations may be made to Operation Eyesight International. On-line condolences may be sent to: www.kaulbachfamilyfuneralhome.com And when from death I'm free, I'll sing on, I'll sing on, and when from death I'm free, I'll sing on; and when from death I'm free, I'll sing God’s love for me, and through eternity I'll sing on, I'll sing on, and through eternity I'll sing on!
Share Your Memory of
George
Upload Your Memory View All Memories
Be the first to upload a memory!
Share A Memory