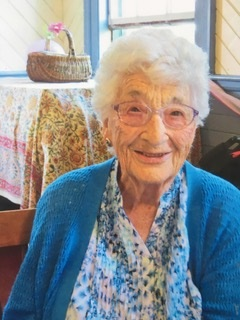 Thelma Harrison (Bauld) Bent – 96, formerly of Tupperville, passed away peacefully at Evergreen Home for Special Care, Kentville on March 4, 2019. She was the daughter of the late Stewart Bauld and Ethel Gesner. Thelma was born in Upper Granville, NS on August 20, 1922.  As a young woman she worked at Acadia Dining Hall, Wolfville, NS.  In 1945, she married Ralph Bent, Tupperville. They worked their farm and raised a family together there for many years. Thelma was devoted to her family, community and church.  She was a lifetime member of the Tupperville Women's Institute and UCW, fulfilling many offices and roles in each. She was a long-time member of the William Black United Church and Wesley United in Tupperville.  She served on the Fruit and Vegetable Committee at the Annapolis Valley Exhibition where her artwork, home-made bread, and apple pie also won many awards. She was known for her creativity and artistic talents, enjoying painting, rug hooking, quilting and sewing.  She enjoyed crossword puzzles and liked nothing better than a game of crokinole with her family. She was an avid gardener with her favourite flowers being zinnias and gladiolas. Thelma is survived by daughters Ellen Bent- Ruggles (Richard Gundersen), Lawrencetown; Janet Bent-Miller, Kentville; son Edward (Kelly Spurr), Bridgetown.  Grandchildren Angie (Blair Jensen), Lower Sackville; Dustin (Carrie) Bent, Canaan; Abby Bent, Halifax; Shelby Spurr, Halifax, sister Marguerite (William Hirtle), Bridgetown; brother Nelson Gesner, Ottawa; great-grandchildren Alex and Liam Jensen; Alana and Shane Bent, as well as, several nieces and nephews. She was predeceased by husband Ralph E. Bent; step-father Borden Gesner; brother Thomas Bauld; sister-in-law Barbara Bauld and son-in-law Doug Miller. A visitation will be held Thursday, March 7 from 6:30- 8:30pm at Kaulbach Family Funeral Home where the service will take place Friday March 8 at 2:00pm with Rev. Don MacPherson officiating, reception to follow.  Burial will take place at a later date. Donations in memory may be made to William Black United Church, Annapolis Valley V.O.N., or a charity of your choice. Online condolences may be made at www.kaulbachfamilyfuneralhome.com