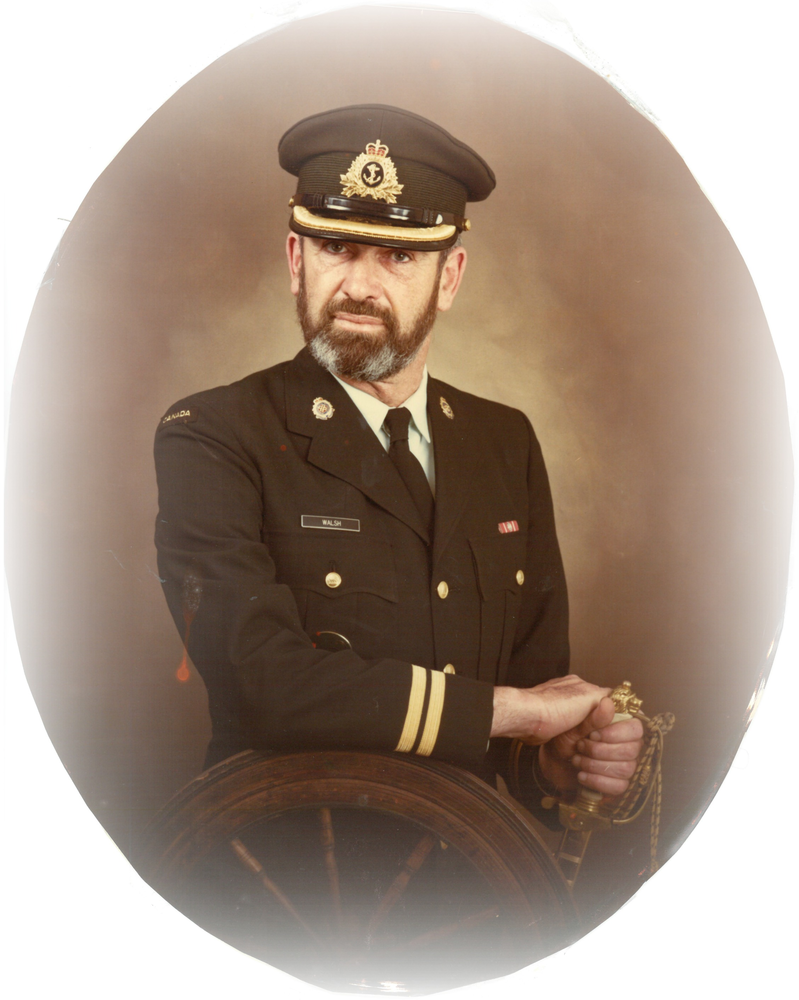 Walsh, Captain William (Bill) CD2 RET’D RCNR, RCN, CAF
Crossed the Bar on October 30th on his final voyage. He was born in Holyrood, Newfoundland on December 29, 1931. He was the oldest son of the late Bernard and Hannah (Best) Walsh. Bill joined the RCNR at HMCS Cabot in St. John’s Nfld. in 1950, then transferred to the RCN as an OSPWR in 1951. He was commissioned from the ranks 1964.  He was the Naval Representative on theTri Service Team that researched and implemented a revised Public Fund Accounting System which was applicable to all three Services. He served on various ships and shore establishments. In 1960 he commissioned the HMCS COLUMBIA and in 1973 he commissioned the HMCS ALGONQUIN (DDH283) as Supply Officer. He served as Squadron Supply Officer when ALGONQUIN was Flag Ship in STANANFORLANT. After retirement from the military he served as a Supply Officer in the Canadian Coast Guard. He was Counselor for Annapolis County, representing District 6 for nine years. He was a member of the Royal Canadian Legion in Clementsport, NS. He was also a member of the C&POs’ Association.

Special thanks to the Health Care Team of Valley Regional Hospital. Family Flowers only. In lieu of flowers, memorial donations can be made to the Royal Canadian Legion, Clementsport Branch #122 or St. Louis Catholic Church in Annapolis Royal.

A naval service will be held on Saturday, November 4th at 2:00pm at the Royal Canadian Legion, Clementsport with reception to follow. A private family service will be held at a later date. Online condolences may be sent to the family by visiting www.kaulbachfamilyfuneralhome.com