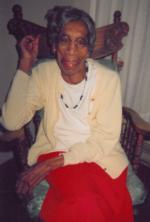 JACKSON, Emma Lucinda Mae- 94, of Annapolis Royal, passed away with family by her side on Tuesday, January 4, 2011 at the Annapolis Royal Nursing Home. Born in Inglewood, N.S. she was the daughter of the late William and Alice (Brothers) Jackson. Emma enjoyed cooking and spending time with her family. She enjoyed spending her winters visiting family in the Caribbean. She is survived by her children; Elnora Lake (Dr. Cuthwin) of Antigua, Vivian Sweeney (late Dr. Marvin) of Trinidad, Ruth Rodwell (Clarence) of Virginia, U.S.A. and Walter (Sylvia) Jackson of Dartmouth. Grandmother of Carmencita (Stephen Watt), Michelle Gray (Edward), Vincent Sweeney (Theresa), George Lake (Anne Marie), Victoria Lake (Michael Yapp), Marva Sweeney-Nixon (Graham), Lucinda Michael (Darrell), Jeff Jackson (Stephanie), Stacy Abriel (Glen), Aaron Jackson and 22 great-grandchildren; sister-in-law Theta Jackson several nieces and nephews; the Jacksons from Inglewood and the Morrisons from Middleton; cousin to William Clements of Nashua, New Hampshire and Doris Martin of Amherst. Emma was predeceased by her brothers, Victor, Clarence, James, Earl; sisters, Marguerite Morrison and Josephine Tripp. No visitation by request. Funeral service will take place Sunday, January 9, 2011 at 2:00 pm from the Kaulbach Family Funeral Home, Bridgetown, with Pastor Cathy Batson officiating. A private committal will take place in the Riverside Cemetery. In lieu of flowers donations may be sent to the Inglewood United Baptist Church or to the Annapolis Royal Nursing Home Activities Program. We would like to say a special thank you to the staff of the Annapolis Royal Nursing Home for the care given to our mother over the past 3 years. Email condolences may be sent to www.kaulbachfamilyfuneralhome.com
To plant a tree in memory of Emma Jackson, please visit Tribute Store
Services for Emma Jackson
There are no events scheduled. You can still show your support by planting a tree in memory of Emma Jackson.
Visit the Tribute Store
Share Your Memory of
Emma
Upload Your Memory View All Memories
Be the first to upload a memory!
Share A Memory
Plant a Tree