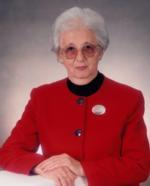 Gallagher, Mary "Rhoda"- of Lequille, Annapolis Co., passed away peacefully on Thursday Dec. 10, 2010. Born in Miscouche, P.E.I. she was the daughter of the late Kenneth and Ann (MacDonald) Lecky. She was a loving and supportive mother who modeled a strong work ethic to her family through the years. She was a member of St. Louis Catholic Church and was president of the Ladies Auxiliary for many years, after which she became the first president of the Catholic Women's League for the parish. As well, she was an active community volunteer and received numerous awards of recognition for outstanding service. She was a faithful supporter of her beloved Toronto Maple Leafs, an avid card player particularly bridge, and was involved in various social and dance groups. She is survived by sons, Ken (Toni) Lequille; Stephen (Mary Helen), Granville Centre; daughters, Mary (Jim) Robson, Bedford; Joanne (Bill) MacNeil, Bedford; grandsons, Nick Gallagher, Calgary; Josh (Susan) Gallagher, Red Deer; Tyler MacNeil, Brent MacNeil and Quinn Robson all of Bedford; brother, Donald Lecky, Squamish, BC; and sister, Teresa Burrow, Fredericton, NB; many nieces and nephews. She was predeceased by her husband John "Jack"; brother, David Lecky; sisters, Evelyn Lecky, Rose Burgess, Emily Gatenby, and Gertrude Lecky. Visitation will be held 7-9 p.m. with prayers at 7 pm on Monday Dec. 13, 2010 at the Kaulbach Family Funeral Home, Annapolis Royal. Funeral Mass will be held Tuesday Dec. 14, 2010 at 11:00 a.m. from St Louis Catholic Church, Annapolis Royal. Interment will follow in St. Louis Catholic Cemetery. In lieu of flowers, donations in Rhoda's memory may be sent to St. Louis Catholic Cemetery or to the Annapolis Community Health Centre. On line condolences may be sent to www.kaulbachfamilyfuneralhome.com
To plant a tree in memory of Mary Gallagher, please visit Tribute Store
Services for Mary Gallagher
There are no events scheduled. You can still show your support by planting a tree in memory of Mary Gallagher.
Visit the Tribute Store
Share Your Memory of
Mary
Upload Your Memory View All Memories
Be the first to upload a memory!
Share A Memory
Plant a Tree