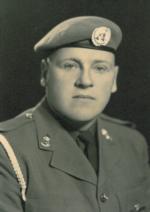 Clayton, Cecil Allison, 83, of Bridgetown passed away Oct. 11, 2010 in Soldiers Memorial Hospital, Middleton. Born in Parkers Cove he was a son of the late Frank and Florence (Eaton) Clayton. Cecil served in the Canadian Military with 4RCHA in Germany, Cyprus and Petawawa. After retiring from the army he worked with Standard Paving for 30 years. He was a member of Branch #33 Royal Canadian Legion, Bridgetown; and the Bridgetown Curling Club. He enjoyed deer hunting and spending time at his cottage every summer with family and friends. He is survived by his wife Kathleen, daughters: Lee Ann (Edward) Hebb of Wilmot, Ina Walker of Beaconsfield; sons: Roderick (June) of Woodstock, NB, Glenn of Bridgetown; Daniel (Erin) of Fredericton; 7 grandchildren and 2 great grandchildren; brother Arleigh "Bill" of Parkers Cove. He was predeceased by brothers: Forrest, Carl, Francis, Ronald and Guy; sisters: Flossie and Geraldine; grandson Chad; son-in-law Harry Walker Cremation has taken place. Visitation will be held 7-9 p.m. Wednesday in the Kaulbach Family Funeral Home, Bridgetown and where the Royal Canadian Legion will hold their service at 7:00 p.m.. A family graveside service will be held 2:00 p.m. Thursday in Riverside Cemetery, Bridgetown with Rev. David Cumby officiating. Donations in Cecil's memory may be sent to a charity of one's choice. On line condolences may be sent to www.kaulbachfamilyfuneralhome.com
Share Your Memory of
Cecil
Upload Your Memory View All Memories
Be the first to upload a memory!