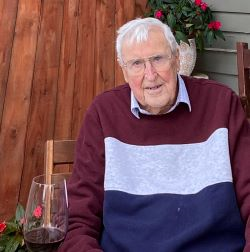 Please share a memory of David to include in a keepsake book for family and friends.
View Tribute Book

David was born on 16th August in Chingford, England.  His love of math and all things numbers started with his statistical analysis of Tottenham Hotspur Football Club, through an Electrical Engineering degree at Imperial College, University of London.  This interest continued when his grandchildren, on a regular basis, tried to explain the ‘new math’ to him.  After serving in the Royal Navy on-board HMS Ark Royal, David emigrated to Montreal and then Ottawa where he met Helen on a blind date at a Halloween party.  They married two years later.

Elizabeth , Matthew and a move to Halifax followed where the family laid down roots until David’s retirement in 1991.  Shortly after, David and Helen moved to Granville Ferry, NS.  A small but vibrant community, David and Helen led an active and happy life in the ‘little yellow house’  with sweeping views of historic Annapolis Royal - a view never taken for granted by David sitting on the deck during many a sunny afternoon or working diligently to tend Helen’s garden. While living in Granville Ferry David was an active member of the Duke of Kent’s Barbershop Chorus and a founding member of A Royal Consort.  For many years David was a volunteer driver with the Meals on Wheels programme and was a devoted member of the community of St. Mary’s Anglican Church in Belleisle.

His passion for soccer was unwavering, especially for his Tottenham Hotspur team, even going so far as to name one of the family dogs after the ‘Pride of North London‘!

David had huge love for his wife and family.

He could wrap a present like no other to the point it was part of the gift , and covered every book we owned with old wrapping paper or brown paper.  Grampy will be missed by us all, especially his grandchildren, Nathaniel, Oliver, Isabel and Jackson.  His laughter and sense of humour will never be replaced and will be part of us forever.

Over the last few years many people have helped to take care of David, but none more so than the Nephrology Clinic of Dalhousie University.  Their care, time and effort was exceptional and truly a special group of people who guided not only David but Helen throughout his care.

A Celebration of David’s life will be held in the spring.  He was truly loved and cherished.

In lieu of flowers, please consider making a donation to the Nephrology Clinic, Dalhousie University.  During his last few days David was also treated with great care and compassion by members of the VON and the Red Cross.

Funeral arrangements have been entrusted to Kaulbach Family Funeral Home, Annapolis Royal. On line condolences may be sent at www.kaulbachfamilyfuneralhome.com

Share Your Memory of
David
Upload Your Memory View All Memories
Be the first to upload a memory!
Share A Memory