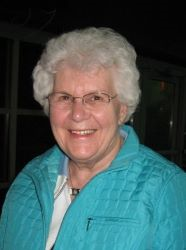 Please share a memory of Helen to include in a keepsake book for family and friends.
View Tribute Book

Helen Louise (Thompson) Brown and William (Bill) Edward Brown (1927-2008) were reunited on December 24, 2022 when Helen passed away at the QEII in Halifax at the age of 93.  Helen was born July 5, 1929 in East Pubnico.  She was the only daughter of the late Franklin and Veta (Goodwin) Thompson.  Following the war, her family decided to buy a farm in the Annapolis Valley.  The seven of them set out from East Pubnico on December 26, 1945 in an old army jeep and made the long trek to Granville Centre.  There she met Bill at school and said he was the most handsome man she had ever seen.  They married in 1946 and moved to Truro where Bill graduated from the Nova Scotia Agricultural College and Helen worked at Pridham’s Portrait Studio.  They later lived in Sydney, and eventually returned to Granville Centre where they bought and ran a store together in the 50’s and 60’s while raising their family.  Helen was an excellent seamstress and made clothes for their children.  Once her family grew up, she was able to return to quilting which was her lifelong passion.  Helen’s first quilting teacher was her dear grandmother, Sarah Goodwin.  Helen later studied quilting under Georgia Bonesteel and taught night classes at the Annapolis West Education Centre for several years.  Bill and Helen were longtime vendors and original members of the Annapolis Royal Farmers and Traders Market where they sold her stitched crafts, quilts, and famous “Market Cookies”.  Helen created many beautiful quilts over the years, some of which found homes the world over. Bill and Helen greatly enjoyed travelling in their small motor home, setting off on each adventure with ‘On The Road Again’ playing on the cassette deck.  Helen is survived by children Susan (Terry) Moulton, Catherine (John) Wojtowicz, only son, John Brown, Joanne (Grant) Wright, Margaret (George) Brown-MacNeil, Pam (Rod) Ellis; grandchildren Rheanna, Emma, Jessica, Sarah, Katelyn, Patrick, Erin, their partners; great-grandchildren Sophie, Lucas, Emerson, Calum; brother George Thompson; sister-in-law, Anne Thompson.  She was predeceased by her loving husband, Bill; a grandson, granddaughter Emily; great-granddaughter Layla; brothers John, David, and Robert Thompson; all of whom she loved dearly.  Helen’s celebration of life will be held at 2pm, Saturday, December 31 at St. Luke’s Anglican Church, Annapolis Royal.  Her niece, Reverend Juanita Barteaux, will officiate.  Reception to follow.  Family flowers only.  Interment at Wadeville Cemetery, Granville Centre.  Donations may be made to the Wadeville Cemetery, or the Granville Centre Community Hall.  Funeral arrangements have been entrusted to Kaulbach Family Funeral Home.  Online condolences may be sent to www.kaulbachfamilyfuneralhome.com

Share Your Memory of
Helen
Upload Your Memory View All Memories
Be the first to upload a memory!
Share A Memory