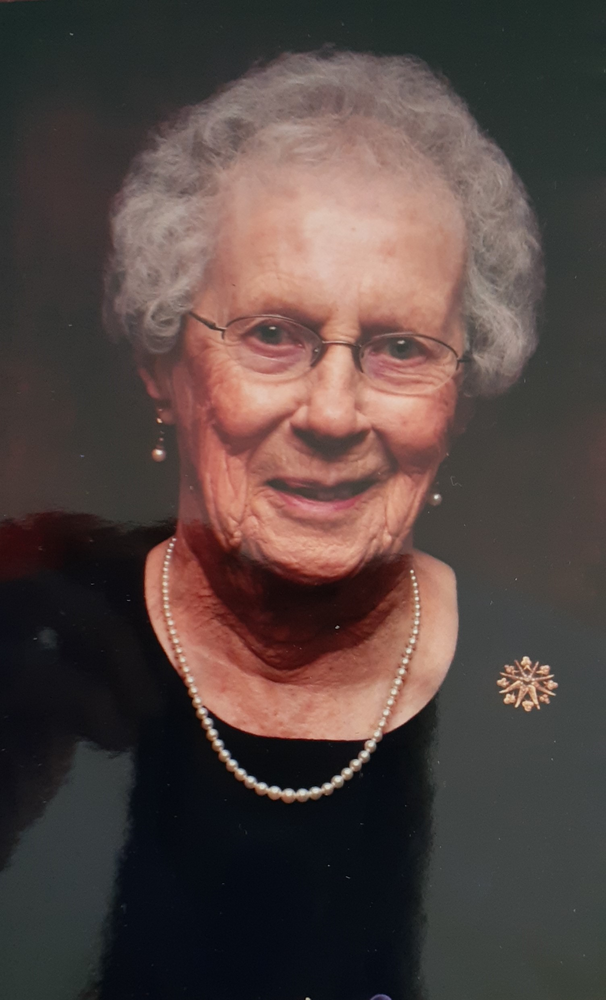 Please share a memory of Doris to include in a keepsake book for family and friends.
View Tribute Book

Having lived an exemplary life for 110 years, Doris Hicks died peacefully on November 21, 2022 after a brief illness. Her family and many friends will miss her unassuming, but strong, gracious and loving presence!

Doris was born on a farm in Saltcoats, SK on November 5, 1912 to pioneer parents, Harold and Emily (Kirkham) Dand.  After losing crops to hailstorms, and in the midst of the “Spanish” flu pandemic, the Dand and J.E. Lawrence families crossed Canada by train in February, 1920 to settle on farms near Bridgetown, NS.

Doris and her two brothers, Joe and Harold, attended school in Bridgetown. A good student, Doris also won the Citizenship Prize as the student judged by both teachers and classmates to be destined to be an excellent all-round citizen. She became just that!

Following graduation from Normal School, Doris taught in several one-room schools in The Valley.  She rose to the challenges of teaching all grades from primary through 11 and formed long-lasting bonds with many of her pupils.

When Lawrence Hicks invited Doris to a corn boil in 1933, a romance blossomed, and they were married in September 1937. Lawrence’s widowed father welcomed them into his home until they moved into the historic house that became our cherished home. Here, they raised their four children: Marilyn, Nancy, Edward and Kirk; and welcomed all their own and their children’s friends throughout the next 50 years! Sadly, Lawrence died in 1992. With her usual pluck, Doris moved to smaller quarters and continued to live vibrantly. More recently she moved nearer her daughters in Wolfville

As the children married and their mates joined the family, Doris and Lawrence welcomed them with warmth and love. Doris even got an “Oscar” for being the “Best Mother-in-law”! Clary, Pat, Stan and Dave predeceased Doris; but Matt, Evelynn and Roxy continue to enjoy and return Doris’s love.

As five grandsons arrived, they, too experienced Gran’s nurturing love and encouragement of their individual interests and talents. Doris was delighted with those young men – Allen, Andy, Craig, Kyle and Fletcher - and their families. She cherished being GranGran to her seven great grandchildren.

While being a devoted wife and mother, Doris was also a community supporter. A faithful Anglican, she participated in many activities in St. James Anglican Church, including teaching Sunday school. In her kind and unobtrusive ways, she helped many people in the community, often soothing the rough edges of life. We realized the extent of her helpful influence when well over 100 well-wishers celebrated Doris on her 100th birthday! When asked for her secret to living so well for so long, Doris replied: “I lived by the Golden Rule.” Indeed, she treated everyone as she hoped to be treated. By her example, she contributed valuable life lessons to many! In her own view, she felt she had been very blessed throughout her life, and she was grateful.

Our family is grateful to Dr. Barbara Ross and Paula and Eric Morine and staff for their exceptional care, The Rt. Rev. Sandra Fyfe and faithful visitors, especially Helen Ackerman and John Montgomerie.

There will be a celebration of Doris’s life at St. John’s Anglican Church, Wolfville on Friday Dec. 2, 2022 at 2:00 p.m. with Rev. Nicole Uzans officiating. (masks required) and a graveside service in Bridgetown will be announced later.

Donations may be made to food banks or charities of your choice.

“Grace was in all her steps, Heaven in her eye. In every gesture dignity and love.” (John Milton)

Share Your Memory of
Doris
Upload Your Memory View All Memories
Be the first to upload a memory!
Share A Memory