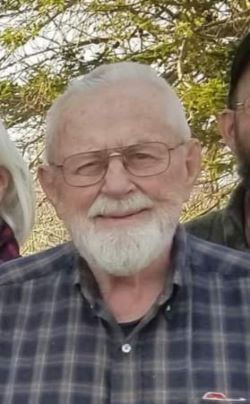 Please share a memory of Victor to include in a keepsake book for family and friends.
View Tribute Book

Born January 15, 1939, in Middleton NS Victor was the first child of Marion (Porter) and Malcolm Troop and lived on a farm in Upper Granville NS. Victor joined the army in 1957. In the course of his career, he worked and traveled throughout Canada and was briefly stationed in Germany for 3 years. He was a member of the Armed Forces for over 25 years attaining the rank of Captain.

Victor and Willie started their own cattle farm before he retired from the Armed Forces in 1986. Crow Harbour Farm went on to produce pure bred polled Herefords which were known for their quality genetics.

Victor enjoyed hunting and the view of life from the seat of a tractor. He taught Hunter’s Safety for several years.

Victor is survived by his wife Wilhelmina (Wouterlood Van Doesburg), daughters Sandra (Daniel Bruce) and Heather (Douglas Hopkin), his brothers Gordon (Gloria), Donald and Edgar (Cheri). He will be missed by his two grandchildren Eben and Hannah (Davin) and his great granddaughter Hallie.

The Family would like to thank the doctors, nurses and other healthcare workers for their care and attention.

Funeral service to take place Saturday November 19 at 2pm at Kaulbach Family Funeral Home in Annapolis Royal. Pastor Herb Anderson officiating. Reception to follow. Interment at a later date. Family flowers only. Donations in Victor’s memory may be sent to the Wadeville Cemetery. Online condolences may be made at www.kaulbachfamilyfuneralhome.com

Share Your Memory of
Victor
Upload Your Memory View All Memories
Be the first to upload a memory!
Share A Memory