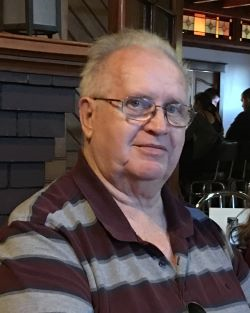 Please share a memory of Thomas to include in a keepsake book for family and friends.
View Tribute Book

The family of Tom Nelson, age 84, of Granville Centre, Annapolis County, is sadden to announce his sudden passing at home on Wednesday, October 5th, 2022.

Born September 9, 1938 in Gananoque, Ontario, and raised in Nova Scotia from the age of six, Tom was the son of the late Norm and Anne Nelson of Granville Centre, and was predeceased by his wife of 59 years, Evelyn (Evie), in 2016.

A mechanic for over 25 years, Tom had a garage in Granville Ferry which also included one of the first Mazda dealerships in Canada. His work career included working at the Annapolis Tidal Power Project during its construction, scallop fishing, transporting fresh fish throughout Nova Scotia and the Eastern U.S. seaboard. He also sold satellite systems and loved that this took him to many out of the way places throughout Nova Scotia, where he got to chat with lots of interesting people. Tom served as Annapolis County Councillor for District 4 (1994-97) and thoroughly enjoyed helping those in the community. His final job, which he retired from at the age of 82, was as a Fishery Observer overseeing fish catch coming in to various wharfs in the area. As a volunteer/Board member with the Annapolis West Health Foundation to the very end, Tom enjoyed his weekly visits to the office, staying active and engaged in something that was close to his heart.

A Celebration of Life service will be held on Thursday, October 13th, 2022 at Kaulbach Funeral Home, Annapolis Royal at 11am. In lieu of flowers donations can be made to the Annapolis West Health Foundation (foundation-awhf@nshealth.ca). On line condolences may be sent to www.kaulbachfamilyfuneralhome.com

Share Your Memory of
Thomas
Upload Your Memory View All Memories
Be the first to upload a memory!
Share A Memory