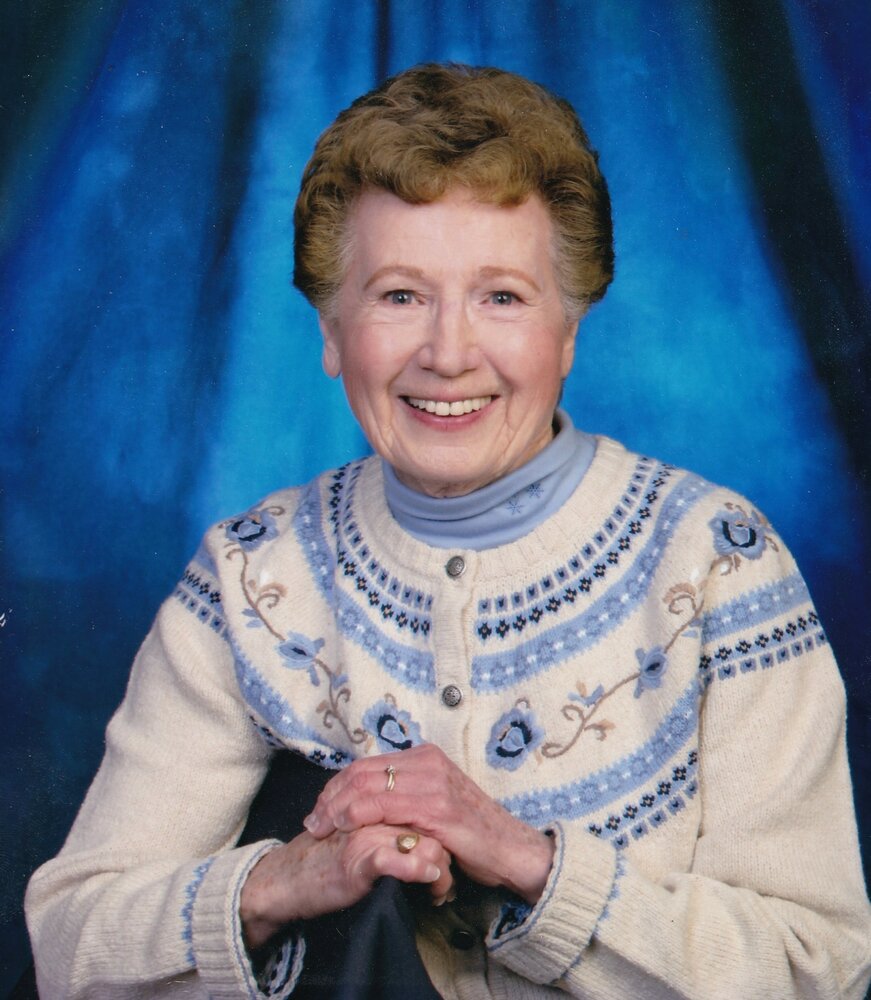 Please share a memory of Marjorie to include in a keepsake book for family and friends.
View Tribute Book

Marjorie Olive (Burns) Williams passed away peacefully in Camp Hill Veterans Building in Halifax on September 21, 2022 with loving family by her side. Marge was born on May 26, 1922 to her dearly loved parents Albert James (AJ) and Nellie Ruth (Rice) Burns in Bridgetown, Annapolis Co, NS. Along with her brother Edward and her two sisters Louise and Audrey she grew up in their beautiful home attached to her father’s grocery store located on Granville St where the Post Office now stands.

Bridgetown was always her home but Marge’s independent and adventurous spirit took her on an amazing and very full life. After graduating high school Marge headed to Saint John, NB for business school and while there in 1943 she decided to enlist in the WRENS (Women’s Royal Canadian Naval Service) partly because she “liked their uniforms”. That decision took her to Galt ON for training, then on to Ottawa ON and in 1944 she was chosen to go to London, England to work as a Writer at 10 Haymarket Square. She never forgot and often shared special memories of people, places, and events from her time in England including being there on VE Day with the crowds at Buckingham Palace.

On discharge Marge decided to enroll in Secretarial Science at Acadia University (Class of 1948). She then headed to Halifax where she went to work for an insurance company in what was then the Capital Theater Building. It was in Halifax that she got to know Les Williams (Acadia 1947/CUAC) who was studying Civil Engineering at Nova Scotia Tech. Marge and Les married in Bridgetown in 1949 at a double ceremony with her sister Louise.

Marge and Les embarked on a wonderful 53-year marriage which took them and their three children on adventures all across Canada: Nova Scotia (Halifax, Lower Sackville, Annapolis Royal); Cape Breton (North Sydney, Port Hastings, Sydney); Outlook, Saskatchewan; Grand Falls, Newfoundland; and Saint John, New Brunswick. Les also worked for a couple of years in Nigeria, Africa where Marge travelled alone to visit him for a month. In 1982 they retired to their beautiful property in West Paradise, NS where five generations of family spent great times together. Marge and Les loved to golf and curl but after Les passed away she decided to give up both to spend time gardening in the summer and hooking beautiful oriental rugs in the winter.

Marge, our wonderful Mom, took us through childhoods full of adventures like summers at sea shores and cabins on lakes, picnics and parties, cozy homes filled with cookies and cupcakes and other delights. Grandchildren and great-grandchildren enjoyed lots of special times with Grammie. Like her father, she was a quick wit and was always ready to tell a joke or two. Mom held definite opinions and could wear you down until you agreed (or left the room). Mom was stylish and lovely.

Marge spent four great years at Camp Hill Veterans Building 4 East (despite the difficulties of Covid). She loved spending time in the beautiful garden, enjoyed sing-a-longs in the lounge, garden, and pub, learned to like bingo, and could pass the time chatting in the dining room. She felt safe and looked after. We want to send our warmest thanks to all the staff and residents who made her time there both comfortable and enjoyable.Marge was predeceased by her much-loved husband Les (1925-2002), father Albert (1893-1981), mother Nellie (1890-1991), brother Edward Burns (1918-1994), her sisters Louise Kinsman (1921-2018) and Audrey Sattler (1924-2004) as well as many sisters-in-law and brothers-in-law.Marge is survived by daughter Barb (Ted) Fraser Dartmouth NS, sons Dave (Jean-Marie) Quispamsis NB, Jim (Cindy) Hampton NB. Grandchildren: Leslie Fraser (Russell Amero), Bob (Lindsay) Fraser all of Dartmouth NS, Erin Williams (Jeff Rogers) Calgary AB, Stephen Williams West Paradise NS, Jeremy Williams (Sarah McLellan) Toronto ON, Jeffrey Williams Edmonton AB. Great-grandchildren: Alexis, Morgan, Reid, Taylor Amero and Marissa, Riley, Jaxon Fraser all of Dartmouth NS. Cousins, nieces and nephews, and friends near and far.

A Graveside Service for family and friends will be held on Saturday October 22, 2022 at 2 PM in Bridgetown’s Riverside Cemetery. Donations in memory to Bridgetown Baptist Church, Camp Hill Garden Fund or a charity of your choice. Funeral arrangements made through Kaulbach Family Funeral Home, Bridgetown.  www.kaulbachfamilyfuneralhome.com .

Share Your Memory of
Marjorie
Upload Your Memory View All Memories
Be the first to upload a memory!
Share A Memory