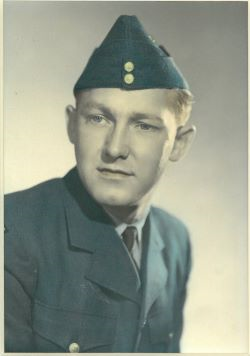 Please share a memory of Franklyn to include in a keepsake book for family and friends.
View Tribute Book

Frank was born in Bangor, PEI to John and Marina MacDougall (Jenkins) on March 31, 1935. Growing up in Halifax, N.S. Frank played hockey with his brothers, where he eventually went on to play junior hockey with the Northside Franklins in North Sydney, Cape Breton. The highlight of his junior career was playing against Henri Richard.

Frank was an exceptional hockey and baseball player, and was able to share his athletic skills when he joined the R.C.A.F.

With his wife Verna by his side, Frank spent 31 years with the Airforce, Service in Canada, Europe and a peacekeeping tour with the U.N. in Golan Heights, Israel.

Frank is survived by his son, Todd MacDougall (Faye) of Round Hill; daughters, Colleen MacDougall (Paul) of Comox, B.C. and Christine Korhonen of Greenwood; grandchildren, Paige, Callum, Shane, Leah, Patrick, and Meagan; great grandchildren, Ryan, Clementine, Prudence and Andrew. He is also survived by his brother, Darryl of B.C. and many nieces and nephews and long-time friend, Wayne Southern.

We would like to thank Dr. Buchholz for his dedication and care to Frank over the many years. We are truly grateful. Also, to the palliative care team at Annapolis Community Health Centre.

At Frank’s request, there will be no viewing or service, but a scattering of ashes with immediate family only.

Donations can be made to Annapolis Community Health Centre Palliative Care Unit or Kidsport Nova Scotia in memory of Frank.

Share Your Memory of
Franklyn
Upload Your Memory View All Memories
Be the first to upload a memory!
Share A Memory