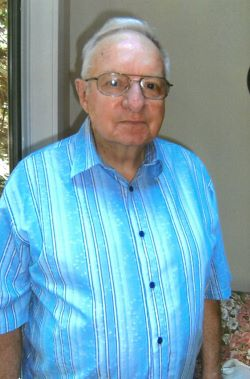 Please share a memory of Reginald to include in a keepsake book for family and friends.
View Tribute Book

Reginald Charles Ritchie, died Sunday, August 21, 2022. Born September 8, 1935, age 86, in Lequille in the house where he lived most of his life. Son of the late Russell Ritchie and Margaret (Mills) Ritchie, Scott. As a boy he helped his Uncle Reg Ritchie with work on the farm. He then worked for Dominion Stores in several places around Nova Scotia and later he went to work with Hudson Bay Co., in Fort Saint John, British Columbia. Several years later he moved back to Nova Scotia and set up a business of his own selling meats and groceries around Annapolis County. He had the opportunity to work with the NS Department of Highways and became an equipment operator and then as foreman for the Seal Coat Field Crew. He later became a Superintendent of Highways/ Transportation of Annapolis West District, from which he retired and was presented with a long service award. He was elected a Councillor for the Municipality of Annapolis Co., and was returned 4 times, serving as Warden before he retired. He served on the board of the Annapolis General Hospital and served as EMO co-ordinator for Annapolis Co., and the Town of Annapolis for 20 years. As a Lion he served in all positions and named a Life Member. As a Mason he served terms as Master and Secretary. He will be greatly missed by his wife Ruth (Parke); children, John (Rebecca), Alberta; Janice Ritchie-Wile, Alberta; grandchildren, Jordan Wile, Alberta, Tyler Wile, Alberta, Mary Ritchie, Alberta, Nicholas Ritchie, Alberta; sister, Frances Ells, Ontario and nephews, Clifford, Richard and Charles. Cremation will take place under the care and direction of the Kaulbach Family Funeral Home, Annapolis Royal. Visitation will be held in the Kaulbach Family Funeral Home, Wednesday August 24, form 7-9pm with a Masonic Service at 6:30pm followed by a Lions Service. A funeral will be held in St. Luke’s Anglican Church, Annapolis Royal, Thursday, August 25, 2022 at 2pm with Rev. Julia Ford officiating. Interment in Woodlawn Cemetery, Lequille. In lieu of flowers, donations in memory may be made to the Annapolis Health Centre or St. Luke’s Anglican Church. Online condolence may be made at www.kaulbachfamilyfuneralhome.com

Share Your Memory of
Reginald
Upload Your Memory View All Memories
Be the first to upload a memory!
Share A Memory