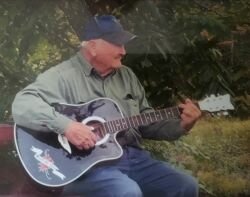 Please share a memory of Earle to include in a keepsake book for family and friends.
View Tribute Book

Earle passed away peacefully at Soldiers Memorial Hospital, Middleton, surrounded by his family on July 11, 2022, at the age of 91.  He was born in Bridgetown and was the son of the late Leta (Fredericks) and Kenneth Hannam of Dalhousie.

Earle retired after 40 years with the Nova Scotia Light & Power Company.  He was an avid fisherman, hunter, gardener & cribbage player and loved time spent with family, friends and the Dalhousie Crew & Bowater “boys” at his beloved Dalhousie camp.  In his earlier years he enjoyed boating, curling, badminton and hockey and was a lead guitarist in a country & western band. He enjoyed “jams” right up until his latest hospital stay.

The family would like to thank Dr. Goodine, his long-time doctor, the Collaborative Practice doctors at Soldiers Memorial as well as the wonderful hospital nurses and staff.

A memorial service will be held at Kaulbach Funeral Home in Bridgetown on July 13, 2022, at 3:00 pm.  Family flowers only, donations can be made to the Heart and Stroke Foundation, St. Peters Dalhousie Anglican Church, Dalhousie, or charity of choice.

Share Your Memory of
Earle
Upload Your Memory View All Memories
Be the first to upload a memory!
Share A Memory