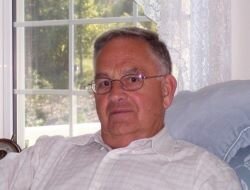 Please share a memory of Francis to include in a keepsake book for family and friends.
View Tribute Book
Obituary of Francis R Pugh Pugh, Francis “Frank” Richard - 85, Lequille, Loving and devoted husband and father, passed away March 15, 2022 in Annapolis Community Health Centre. Born September 9, 1936, in Dartmouth NS, he was the son of the late Francis A and Marjorie (Williams) Pugh. Frank studied electronics before shifting his focus to refrigeration. He began his career with the Federal Government working at HMC Dockyard in Halifax, becoming a certified refrigeration technician before moving to CFB Cornwallis in 1964. He worked a short time at CFB Greenwood in the 1970’s before returning to CFB Cornwallis, retiring when the base closed in 1995. Throughout the 1970’s and 80’s he also sold and installed VHF marine radios to local fishermen and other businesses. He enjoyed his work and the relationships with people he would meet along his journey in life. Besides his federal employment he also owned a business, providing commercial and residential refrigeration services throughout Annapolis county. He continued to work part time after retirement. He was a hard working family man, a wonderful provider and was always there to help his family and friends. Frank and Carole started dating in their teens and married in 1959. From the beginning they were avid dance partners. They enjoyed square dancing and were members of the House of Roth dancers, attending both provincial and national events throughout Canada. Camping was another activity that he enjoyed with his family and friends through the years. Frank’s interest in electronics continued as he explored the popular CB radio hobby which eventually turned into a part time business. He loved to drive and was always happy to undertake a long road trip. In his later years he spent time woodworking in his work shop. Frank is survived by his wife of 62 years, Carole (Casey); sons, Brian (Velarie), Hubley and Michael (Nancy), Paradise; Daughter, Debbie Baltzer (Mark), Stillwater Lake; Grandchildren, Miranda Amon (Kris), Lower Sackville, Marissa Baltzer (Mike) Waverley, Evan Pugh (Destinee), Lawrencetown; step grandchildren Kurt (Shandi), Kingston; Aaron (Stephanie), Lawrencetown; Tressa (Henry), Alberta, 2 great grand children; numerous step great grand children, close nephews Keith Dares (Kathy), Grant Dares (Sandra), several nieces and nephews and close friend Don Walker. Brother-in-law Mike (Helen) Casey who was only 7 years old when Frank came into Carole's life. Frank and Mike had a very special relationship and in later years spent a lot of time together enjoying fishing, a game of golf and a lot of family times over the years, also survived by sister-in-law Donna (Kevin) MacDonald. Frank was predeceased by his parents and sister Doris (Dares) According to Frank’s wishes, cremation has taken place under the care and direction of the Kaulbach Family Funeral Home, Bridgetown. A celebration of life will be held at a later date. In Lieu of flowers donations can be made to the Valley Regional Hospital Foundation. Online condolences may be made at www.kaulbachfamilyfuneralhome.com
Share Your Memory of
Francis
Upload Your Memory View All Memories
Be the first to upload a memory!
Share A Memory