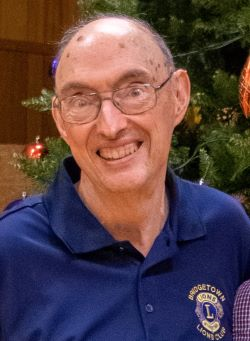 Please share a memory of Clark to include in a keepsake book for family and friends.
View Tribute Book
Clark Frank Morris, Junior died March 10, 2022 in Valley Regional Hospital. He was born on May 9, 1939 in Evanston, Illinois, the son of the late Clark Frank Morris, Senior and Mary Powers Smith Morris. He was a graduate of Rutgers The State University (of New Jersey). He was a computer programmer at several companies including Westinghouse Electric and Philips Lighting. While working for Irving Oil Limited, he took part in the fix for Y2K. After taking early retirement, Clark moved to Canada in 1992 to be with his bride, Marian E. Ward. He was very pleased with the welcome he found in Bridgetown. He was a lifelong church member and transferred his membership to Bridgetown Baptist church soon after his arrival. He has been the one posting the church services on line and making DVDs of the services. Recently, he received his 30 year pin for service with the Lions Club. People may remember Clark as the man who took your money at the Bridgetown Lions Pancake Breakfasts. He was passionate about public transportation, particularly trains. He was a member of the Transport Action Atlantic. Clark is survived by his bride of 30 years, 2 months, 9 days, Marian; his step-children, Lucy Ward (Kelly Phillips), Dartmouth, NS; Benjamin Ward, Michigan; beloved niece, Susi Ward, Michigan; beloved nephew, Gabriel Hostalet, Indiana; grandchildren, Allegra, Aria, Brecken (Jennifer), Kayla; great nephews, Harrison and Brady, great niece, Sydney; and many other extended family members. As well as his parents, Clark was predeceased in death by his sister, Faith. Funeral arrangements have been entrusted to Kaulbach Family Funeral Home, Bridgetown. Cremation has taken place. Visitation will be held on Thursday, March 17, 2022 from 7-9pm in the Kaulbach Family Funeral Home. The funeral service will be held on Friday, March 18, 2022 at 2 pm in the Bridgetown Baptist Church. All Covid 19 restrictions will be followed. Masks will be required. The service will be web-casted and available on the Kaulbach website. Burial in Bloomfield, New Jersey at a later date. Family flowers only. Donations in memory may be made in Bridgetown Baptist Church or Bridgetown Lions Club. On line condolences may be made by visiting www.kaulbachfamilyfuneralhome.com
Share Your Memory of
Clark
Upload Your Memory View All Memories
Be the first to upload a memory!
Share A Memory