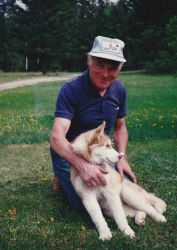 Please share a memory of Eduard to include in a keepsake book for family and friends.
View Tribute Book
October 5, 1931 – January 29, 2022 Bosshard, Eduard (Ed) - Born in Zurich, Switzerland and resident of Port Wade, Nova Scotia. Ed passed away peacefully at Annapolis Royal Nursing Home on January 29, 2022 in his 91st year. He was predeceased by his wife, Rosemary who passed in 2011. As a young man following his military service, Ed enjoyed extensive motorcycle travel throughout Switzerland, Scandinavia, Italy and Germany, and he enjoyed playing the accordion in a Swiss traditional band. In search of adventure and a new life, he immigrated to Ontario, Canada in 1956 where in his early years he became co-owner of a small manufacturing business. Inspired by his Alpine roots, Ed built a chalet overlooking Georgian Bay. His drive for new adventures then led him on a cross Canada Winter camping trip in the mid-70’s where he rekindled his love for the mountains and exchanged the Alps for the Rockies. As a talented machinist and licenced heavy-duty mechanic, he found employment performing maintenance and repair on 235 tonne haul trucks at one of Canada’s foremost mining operations located close to a small Rocky Mountain community in south-eastern British Columbia which became home for over 20 years. More adventures followed: exploring, camping and canoeing in Alaska, the Yukon and much of Western Canada and the USA. In preparation for retirement, he and Rosemary built their rustic log house in the East Kootenays of British Columbia with views of the Steeples Mountain Range. Ed's love of Siberian Huskies led to many pleasurable years of dog sledding with his treasured canine friends. In January 2008, he and Rosemary moved to Port Wade, Nova Scotia for yet another adventure enjoying and exploring Atlantic Canada. Ed will be missed by family and friends in Canada and Switzerland. Heartfelt thanks to Dr. Buchholz and staff of the Annapolis Royal Nursing Home for the compassionate care shown to Ed. At his request, cremation has taken place under the care and direction of the Kaulbach Family Funeral Home, Annapolis Royal and there will be a private family memorial only. Donations in Ed’s memory may be made to the Nova Scotia SPCA or a charity of your choice. Online condolences to www.kaulbachfamilyhome.com
Share Your Memory of
Eduard
Upload Your Memory View All Memories
Be the first to upload a memory!
Share A Memory