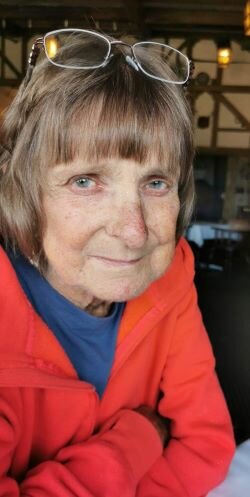 Please share a memory of Linda to include in a keepsake book for family and friends.
View Tribute Book
Gillard, Linda Louann (nee Holland) – 72, of Allains Creek, passed away January 10, 2022 in Digby General Hospital. Born in Halifax, April 23, 1949, she was the daughter of the late Clarence Holland and Madeline (Croak) and William (Bill) Lawson. Linda was Personal Care Worker for nearly 20 years, spending her working years at the Annapolis Royal Nursing Home before retiring in 2009. Some of her favorite past times were reading, rug hooking, cross stitching, walks on the beach and going for a picnic, no matter the weather, and even if the picnic was in the truck. She was a devoted wife, mother, grandmother, who will be great missed by her family. Linda is survived by her husband, Norman “Dave”; daughters, Sharon Longmire (Jason Archibald), of Newport Station, Sheila (Shawn) Keizer, Edmonton, Alberta; grandchildren to whom she was known as “Nans”, David and Hannah Longmire, Jeremy Smith, Ashley and Michael Foster, Gretchen Archibald, Chris and Ethan Keizer; great granddaughter, Aria Keizer; 5 brothers and 2 sisters; bonded sister Marybelle Gillard; several nieces and nephews. Besides her parents, she was predeceased by her son, David Norman. Cremation has taken place under the care and direction of the Kaulbach Family Funeral Home, Annapolis Royal. There will be no service at this time. Donations in Linda’s memory may be made to a charity of choice. Online condolences may be made at www.kaulbachfamilyfuneralhome.com
Share Your Memory of
Linda
Upload Your Memory View All Memories
Be the first to upload a memory!
Share A Memory