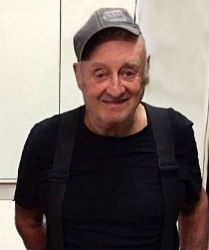 Please share a memory of Douglas to include in a keepsake book for family and friends.
View Tribute Book
A Graveside Memorial Service will be held 2:00 pm, Saturday May 7, 2022 at the Wadeville Cemetery, 122 South Side Drive, Granville Centre. Fellowship to follow at the Granville Centre Community Hall. Everyone Welcome It is with heavy hearts we announce the death of our father, Douglas Edward Walker, on November 27, 2021. Born in Digby, Nova Scotia on October 6, 1935, he was the only son of the late Lawrence and Vivian (Munro) Walker. Dad worked very briefly for the Bank of Nova Scotia before he decided it wasn’t for him. He then drove school bus and worked at Clyde Baltzer’s Garage before he began trucking for Casey’s Fisheries and later S. F. Rendering. Dad met many new friends along the way and loved to tell stories of his adventures on the road. With his extensive knowledge of the highways and backroads of Nova Scotia, Dad was the family GPS. During his working career and after retiring, Dad actively farmed and continued until April, 2021, when he took on a supervisory role. Survived by daughters, Brenda (Russell) Ernst, Marlene (Henry Stoddard) Walker, Anna (Ronnie) Guest and son, Robert (Darlene) Walker. Granddaughters Linda (Kevin), Nicole (Brent), Michelle (Brandon), Keoni (Jonah) and Janelle (Colton). He is also survived by sister, Anna (Stirling) Fish, Niagara-on-the-Lake, several nieces, nephews and cousins. Besides his parents, he was predeceased by his loving wife of 62 years, Marion (Rafuse). Visitation and a graveside service will take place at a later date. Donations in Dad’s memory may be made to the Nova Scotia Ostomy Association at Ostomy Halifax, PO Box 8476 Halifax, NS B3K 5M2, e-transfer treasurer@osstomyhalifax.ca, or a charity of your choice. Online condolences may be made at www.kaulbachfamilyfuneralhome.com.
Share Your Memory of
Douglas
Upload Your Memory View All Memories
Be the first to upload a memory!
Share A Memory