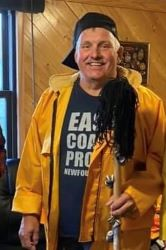 Please share a memory of Eliab to include in a keepsake book for family and friends.
View Tribute Book
It is with broken hearts that we announce the passing of Eliab Reginald Curtis, 66, of Centrelea after a brief illness on October 25, 2021. Eliab was born in Come by Chance, Newfoundland but grew up in the community of Hatchet Cove his whole life. He worked many jobs and at a young age he went to work in Long Harbour and then IOCC in Lab City. In 1986 he married “the love of my life” and raised two sons. In 1992 the family moved to Centrelea, NS and Eliab started flagging with Rice’s Construction and Dexter’s and then went to work at Britex until it closed in 2004. His last job was with NSCC Kingstec where he had a special repertoire with his co-workers and students and made many great friends. He was well known for his staff barbecues and Christmas Breakfasts. Eliab was a proud Newfoundlander and was known for his yearly Newfie parties where he served up moose soup and ‘screeched’ in people the traditional Newfoundland way. He loved to have visitors and cook up ‘Feeds’. He was well known for his fish cakes, blueberry pancakes, onion rings and homemade fish and chips. He loved his property and took immaculate care to mow, put up flags, feed the many birds and decorate for the summer. He loved having campfires which were always the highlight of his summer. He loved his family immensely and sacrificed everything for them. He became a Beaver and Cub leader to be involved with his boys. He volunteered when the boys were on the Bridgetown Sea Kings swim team even becoming belly flop champion and being named parent of the year. He baked banana bread with Jordyn, played tic-tac-toe with Adalyn and took Stevie for rides on the lawnmower. No one could make cream of wheat like Poppy! He loved them all so much. He loved a good time and together, Doris and Eliab enjoyed many trips, concerts, dances and having fun with friends and family. He had a joke to share with everyone and loved a good game of Crib. Eliab was a member of the Bridgetown Baptist Church and served as a greeter, helped to take up collection and a youth group leader. He was the barbecuer for the BWF yard sales and many other church events. He volunteered at the Centrelea Community Hall even arranging a fish cake and bean supper. Eliab is survived by his wife of 35 years, Doris (Hiscock); sons, Steven (Kandis) and Matthew; “My little Darlings”, his granddaughters, Adalyn and Jordyn; grandson “Bops” little boy Stevie; brothers, Terry (Diane), Paul (Brigitte); sister, Beverley (Mark); sister-in-law, Elaine; uncles, George (Gloria), Albert (Judy), Alonzo (Michelle); aunts, Lillian, Margaret, Maisie (Raymond), Flo; nephews, Jim (Wayne), Mark, David (Sam), Jeremy (Kaitlyn), Mason (Ashley), Dylan (Jessica); nieces, Donna (Richard), Marcie (Medford), Jenelle (Andrew), Amanda (Jeff); Great nephews, Jeremy, Kristian and Emmit; great nieces, Ashley (Connor), Cassandra, Kylie, Abby; great-great niece, Harper; many cousins. He was also survived by his two fur buddies, Felix and grand baby, CC. Eliab had many great friends, too many to mention, which he loved dearly. Besides his parents, Freeman and Loretta (Blundon) Curtis, he was also predeceased by in-laws, Alfred and Amy (Tibbs) Hiscock; brother-in-law, James Langmead; uncles, Jack, Ron (Phyllis), Dave (Dot), Les (Maude), Gerald, Jim; aunts, Mary (Max), Gladys (Ned), Hilda (Ike), Veenie (Reginald), Clarice; and his little bed buddy, Ginger. The family would like to welcome family and friends to Bridgetown Royal Canadian Legion to celebrate Eliab’s life at 2pm on Friday, November 5, 2021, with Pastor Herb Anderson officiating. Covid 19 restrictions will apply; Masks will be mandatory, as well as proof of vaccinations and ID at the door. Donations in Eliab’s memory may be sent to the Centrelea Community Hall c/o Bill Crossman 3134 Hwy 201 Bridgetown, NS B0S 1C0. We the family would like to thank Dr. Chris Stone and Dr. Ken Buchholz, as well as the many doctors, nurses and VON who helped care for Eliab. God bless you all!
Share Your Memory of
Eliab
Upload Your Memory View All Memories
Be the first to upload a memory!
Share A Memory