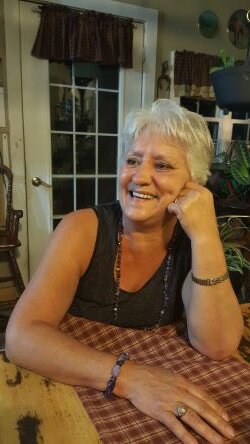 Please share a memory of Cecile to include in a keepsake book for family and friends.
View Tribute Book
Atkinson, Cecile Louise – 66 of Round Hill, passed away peacefully at home, October 19, 2021. Born in Annapolis Royal, October 17, 1955, she was the only daughter of the late Cecil and Priscilla (Lou) Atkinson. Cecile began her nursing career at the age of 16 while still in high school. During her working years she worked in multiple different nursing homes as well as running her own for a number of years. Music, was also a huge part of Cecile’s life. She could be found performing locally; playing many different instruments and singing. Her love extended from music and animals to her friends and family. Survived by husband, Calvin; children, Kimberley (Tim) Hatchard, Kathy Walker (Marty), Jacquelyn Martell (Dan), Matthew Walker (Pippa); Grandchildren, Kristen and Bowen Horton, William and Vincent Walker, Owen and Alex Hatchard, Gavin Parker and Keira Daniels; Great Grandchildren, Ryder-Lee, Kaycie-Lee and Morgan Rose Foster; Brothers, Gordon (Sharon) Atkinson, John (Cindy) Atkinson; many nieces, nephews and close friends. Besides her parents, she was predeceased by granddaughter, Kaitlyn Hatchard. The family would like to thank Trina Tooker who was Cecile’s best friend, who was by Cecile’s side during her illness, and helped tremendously with her care. Cremation has taken place under the care and direction of the Kaulbach Family Funeral Home, Bridgetown. There will be no service at this time. In lieu of flowers, donations in Cecile’s memory may be made to the IWK.
Share Your Memory of
Cecile
Upload Your Memory View All Memories
Be the first to upload a memory!
Share A Memory