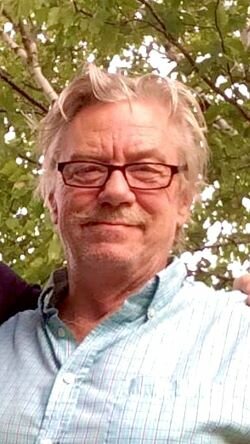 Please share a memory of James to include in a keepsake book for family and friends.
View Tribute Book
TODD, James Fredrick James (Jim) Fredrick Todd (age 70) passed away peacefully at home August 23, 2021 surrounded by his family. The youngest son of the late Howard and Alma (Rice) Todd of Perotte, Anna. Co., he is survived by his son Matthew, sister Joan (Jim) Taylor, brother Bob (Ruby Wilson-Todd) and several nieces and a nephew. Born June 22, 1951 in Annapolis Royal, he lived almost his entire life in Perotte, most happy doing the things he loved to do. Early employment as a draftsman saw him working for Annapolis County which involved considerable mapping. He consequently moved into cartooning and for 12 years was an internationally syndicated political cartoonist and illustrator with Southam News Ottawa. In 1991 he was recipient of the Atlantic Journalism Award for Editorial Cartooning. A collection of political cartoons, “Poll Cats”, was published in 1993. Changing vocation to graphic arts he successfully operated Todd Graphic for 25 years until his health forced retirement at age 69. His graphic creations appear in hiking and canoeing publications as well as many signages and brochures he helped create. An avid outdoorsman and canoeist and third generation licensed guide he traveled extensively the back country of western Nova Scotia. A founding member of the Tobiatic Wilderness Committee he with his close friend Don Rice and others fought to protect the area he so loved from infringement. His other love was a life long interest in music, playing guitar and singing with his musical friends at some arranged venue or simply a jam session just for fun. Jim will be sorrowfully missed by his family and friends. There will be no funeral service with internment at a later date. Donations in his memory may be made to The Canadian Cancer Society or the Heart & stroke Foundation. Online condolences may be made at: www.kaulbachfamilyfuneralhome.com
Share Your Memory of
James
Upload Your Memory View All Memories
Be the first to upload a memory!
Share A Memory