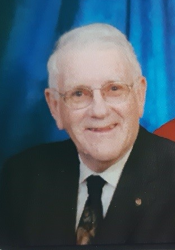 Robert L. Hall, age 80 of Bridgetown, passed away peacefully at Soldier’s Memorial Hospital on June 13th in the loving company of his family. Robert was born Jan. 20, 1941, in Bridgetown, to Frank and Thurza (Foster) Hall. Robert ‘s professional life centered around his ownership and operation of the Robert L. Hall Funeral Homes in Bridgetown and Granville Ferry, where he established a reputation of providing exceptional service with a high degree of empathy and compassion for the community members he served. Robert was active in various professional organizations, where he was recognized for his contributions to the industry. He also served a term as President of the Maritime Funeral Directors Association. Upon his retirement, Robert pursued his other passion in life, which was operating his hobby farm in West Paradise, NS, known as Wending Brook Farm. There, he raised cattle, and tended his woodlot with his faithful team of oxen. Robert had a strong sense of community, where he dedicated much of his time before and after retirement. He served as a Municipal Councillor for Annapolis County, and was very active in the Bridgetown Lions Club, earning the distinction of King Lion. Robert was also active in the Bridgetown Baptist Church, various male choirs, and was the leader and founding member of the Bridgetown Fiddlers. Another passion was volunteering and participating at the Annapolis Valley Exhibition, serving as a board member, event announcer and exhibitor. Always quick with an amusing story, Robert was blessed with a wide circle of very close friends, where they regularly enjoyed time in the woods, hunting, fishing, or making music. Robert was a dedicated and loving husband, father, and grandfather. He is survived by his wife Jean (Fisher) Hall, with whom he was lovingly married for 58 years. He is also survived by sister, Anne McCurdy (Kip) of St. Croix Cove; son Christopher Hall (Sharon) of Rothesay, NB, daughters Heather Caldwell (Glenn) of Cole Harbour, NS and Jennifer Chisholm (Donnie) of Clarence, NS; grandchildren Jack and Thomas Hall and Emily and Samuel Chisholm. He is also survived by many nieces and nephews. Robert is predeceased by his brother Fred. Thank you to the very special group of long-time friends and neighbours, and the dedicated and exemplary care from the VON team. Your care and compassion will always be remembered. A Celebration of Robert's Life will be held 4:00 p.m. July 10,2021 at his home at 4857 Highway 201, West Paradise. COVID -19 restrictions apply. A private family burial will be in St. Croix Cove Cemetery. On line condolences may be sent to www.kaulbachfamilyfuneralhome.com
Share Your Memory of
Robert
Upload Your Memory View All Memories
Be the first to upload a memory!
Share A Memory