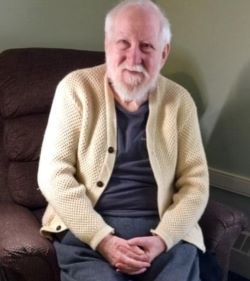 Please share a memory of Peter to include in a keepsake book for family and friends.
View Tribute Book
SLEIGHT, Peter H. - 73, formerly of Granville Beach, passed away in ACHC on May 25, 2021. Born on January 12, 1948, he was the only son of the late James M. Sleight and Margaret M. (Hosterman) Sleight. Besides his university education, Peter also graduated from CFB Cornwallis and spent much of his working life either with the Coast Guard or employed by the Canadian government in the Employment Services division while living in many places such as Victoria, BC; Lloydminster; and Fort Smith, NWT, before moving back to NS in 2004. Peter will be remembered as a very kind and giving man who dedicated over 45 years of service to various Lions Clubs across the country where he served in numerous positions from District Governor to President, Vice President and Secretary. Peter also had a great love for reading, British TV, and music, but most of all loved company and could talk endlessly about Lions or the Royal family. He was also a member of Christ Anglican Church in Karsdale. Peter was predeceased by his cousins Charles L. Hosterman and Marie (Hosterman) Moore. He is survived by cousins Margaret Cooke, Barrie, ON; Susan (Hosterman) Jarvis, Lower Sackville, Timothy Hosterman, Halifax, as well as several other cousins. Peter will be greatly missed by all who knew him but especially by the Annapolis Royal Lions Club where he was currently King Lion, and also by the staff and friends of the Annapolis Royal Nursing Home where he made a lasting impression during his short six months living there. A special thank you for the wonderful care received by the staff of the Nursing Home as well as Dr. Buchholz and the staff of the ACHC. Following Peter’s wishes cremation has taken place under the care and direction of the Kaulbach Family Funeral Home. Due to Covid-19 restrictions a Lions service will be held at a later date. Donations may be made to a charity of choice. On line condolences may be made by visiting www.kaulbachfamilyfuneralhome.com
Share Your Memory of
Peter
Upload Your Memory View All Memories
Be the first to upload a memory!
Share A Memory