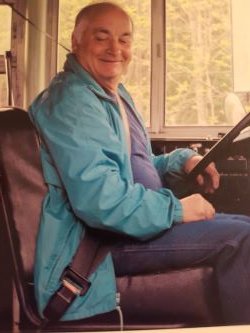 FREDERICKS, Rodney Wayne The family of Rodney Fredericks, 77, of Digby wish to announce his passing on Friday, November 27, 2020 at Soldier’s Memorial Hospital in Middleton. Born in Digby on January 2, 1943, Rodney was the last surviving member of his immediate family. He was predeceased by his parents, Geraldine and Ralph Fredericks, sister, Barbara (Elaine) VanTassell (Fredericks) and nephew, David VanTassell. Surviving are his wife, Lorraine Fredericks, son Sean (Julie Wong) Fredericks, grandson Connor Fredericks, all of Digby, niece Julie (Janet Bowers) VanTassell, Liverpool, NS, nephews Mark VanTassell (Donna), Ontario and Terry VanTassell, British Columbia, as well as several grand nieces & nephews. Rodney left during his senior part of high school and entered the reserves, doing basic training in Cornwallis. He then enrolled at a vocational school in New Brunswick, taking the auto mechanics trade & eventually earning his journeyman’s certificate. After working at a few garages in Digby, he travelled to British Columbia for 4-5 years to work before returning to Digby in 1967. He operated the Fina Garage in the south end of Digby for a few years before building & opening his own garage (Fredericks’ Services) next to the family home in 1973. In addition to offering mechanical services, he plowed snow, moved buildings/mobile homes and built trailers & moved sail boats. He was also a bus driver for the Digby School Board for 35 years until reaching the mandatory retirement age of 65. It was at this time he began driving for Digby Salvage & Disposal until various health issues forced him to retire in July 2016. The family wishes to thank the staff at Valley Regional Hospital, Soldier’s Memorial Hospital, Digby General Hospital, Mountain Lea Lodge, Tideview Terrace, as well as the various VON’s & CCA’s, who assisted with his care, while living at home. Despite the numerous challenges life handed him over the later part of his life, he never lost his sense of humour, nor his desire to continue living. Rodney has been cremated, as per his wishes, with a family gravesite service to be performed at a later date. In lieu of flowers or cards, please donate in his memory to a charity of your choice.
Share Your Memory of
Rodney
Upload Your Memory View All Memories
Be the first to upload a memory!
Share A Memory