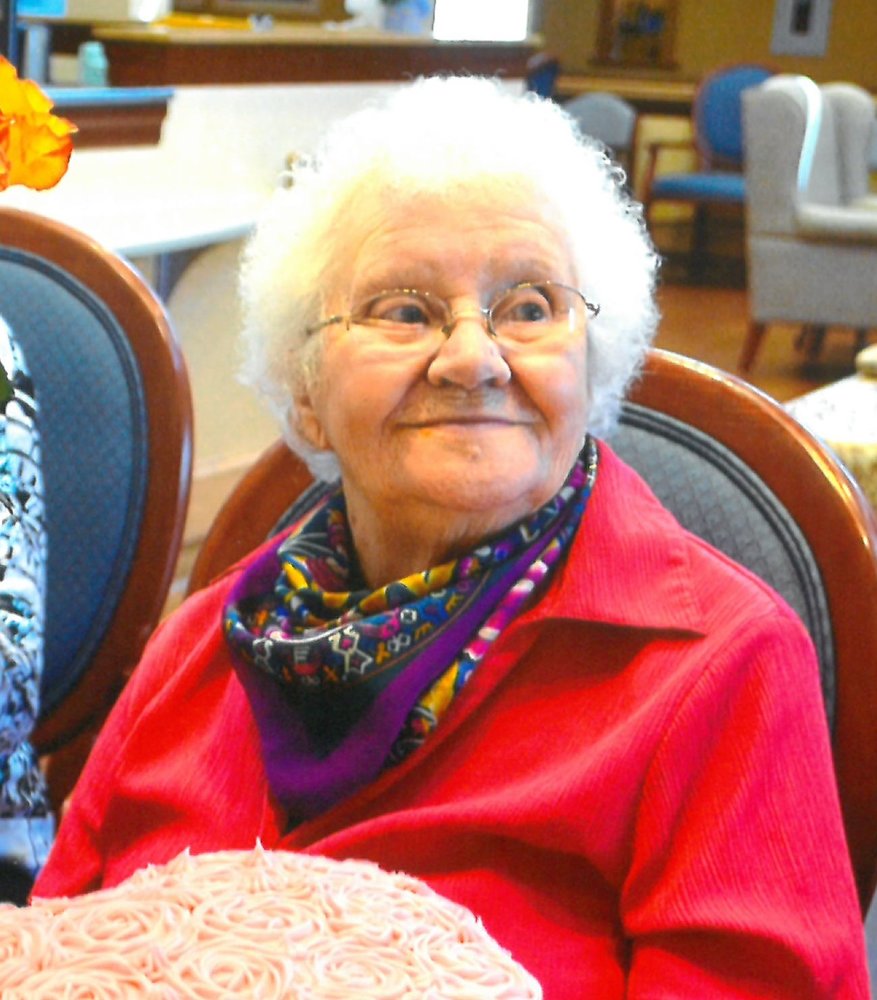 Irene Audrey Clayton- 97, died peacefully at the Heart of the Valley Nursing Home, Middleton, on November 2, 2020. She is now with her Savior whom she loved. Irene was born April 15, 1923 in Young’s Cove. She was the daughter of the late Victor Rafuse and the late Susie (Guest) Rafuse of Young’s Cove. In 1940, she would marry Edison and raise four children. She is survived by her children, Norma McLean (Ronald) of Halifax, Loretta Vidito (Ernest) of Young’s Cove, Paul (Valerie) of Young’s Cove; daughter-in-law, Judy, Upper Clements; sister, Gloria Sarty (Reginald) of Young’s Cove; sister-in-law, Barbara Rafuse; brother-in-law, Doug Walker; eight grandchildren, Timothy McLean (Kim) and Nicole Deering (Mike), both of Halifax, Andrew (Shelly) and Trevor Vidito, both of Young’s Cove, Tina Hatchard ( Darren dec.), Annapolis Royal , Julie Putnam (Nathan), Upper Clements, Steven Clayton (Allyson), Cape Breton and Jenna Sipkema (Luc), Moncton, NB; 16 great grandchildren; one great great grandchild; several nieces and nephews. Besides her parents, Irene was predeceased by her loving husband Edison, and infant daughter, Rosalee Ann; son, Richard; grandson, Jeremy McLean; six sisters and brothers, Eleanor (Ross), Angus Rafuse (Pearl), Hallett Rafuse, Hilton Rafuse (Clara), Marion Walker and Yvonne Thibodeau (George). Irene was a loving wife, mother and grandmother. She was a member of Lake Brook Baptist Church and later, when Lake Brook closed, Parker’s Cove Baptist Church. She taught Sunday school for many years and was a life member of the Women’s Missionary Society. She loved to play Hawaiian guitar and the mouth organ at Kitchen parties at her home with Edison on the fiddle. She played the mouth organ at the nursing home well into her nineties. She loved to quilt and hook mats and seat covers with Edison. In earlier years, she was the family hairdresser cutting anyone’s hair who asked her, free of charge. She enjoyed spending time with her grandchildren and babysat when they were small. They loved going to her home and loved her very much. She always thought of each one with a gift at Christmas, a treat at Easter, their birthdays and Valentine’s Day. She as very content at Heart of the Valley Nursing Home and always expressed how good the staff were to her. She mentioned several times how one of her caregivers leaned down and kissed her on the cheek once, she thought that was so special. Thank you to the staff for taking such good care of Mom. A funeral service will be held 2 pm, Saturday November 7, at the Parker’s Cove Baptist Church, with Pastor Mark Elley officiating. Interment will be in the Hillside Cemetery, Parker’s Cove. In lieu of flowers, donations may be made to Hillside Cemetery or Women’s Missionary Society. Online condolences may be sent to www.kaulbachfamilyfuneralhome.com
Share Your Memory of
Irene
Upload Your Memory View All Memories
Be the first to upload a memory!
Share A Memory