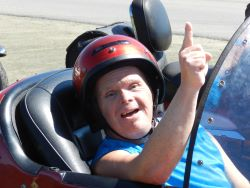 O'NEILL, Ronan Brendan It is with great sadness that the family of Ronan O'Neill announce his passing in Soldiers Memorial Hospital in Middleton on Sunday, September 13, 2020, after a brief illness. Ronan was born in Yarmouth, March 3, 1968, but grew up mostly in West Dalhousie and Centrelea. As a young man he moved to the Supervised Apartments and later The Meadows ARC in Bridgetown, where he became a part of the family of residents and staff there. He was well-known in the Bridgetown area from his daily walks and bike-rides around town. He always had a smile and hello for everyone and was famous for his speeches that he insisted on giving at various family gatherings or other events. If a microphone appeared, Ronan would always end up with it in his hand, commanding everyone's attention! He loved to swim, and spent many hours at the Bridgetown Pool. He also enjoyed travelling, including trips to Disney World in Florida, and numerous trips to the Netherlands to visit family there. He loved Snow White, Michael Jackson and the Dukes of Hazzard and would have long, animated conversations with them, which could be very entertaining (except in the middle of the night while visiting other family members). He lived for Christmas and his birthday - barely into Boxing Day Ronan would start reminding us that his birthday was coming up, March 3rd! Ronan was involved as an athlete with Special Olympics, winning various medals. He also worked for many years with Carleton Road Industries in Lawrencetown and was a member of the Bridgetown Lions Club where he volunteered for many community fund-raising functions. He could be head-strong at times, but always saw the wonder of the world about him. He loved his family very much and was much-loved in return. Despite the added challenges in his life due to Down Syndrome, he taught us many, many lessons of how to be resilient and enjoy each other and life. Ronan is survived by brothers Bob (Dave) and Brent (Nancy) as well as sister-in-law Bliss; nephews Sean and Michael, niece Meredith and their families, as well as many cousins in Canada and Holland. He was predeceased by parents George O'Neill and Charlotte "Bep" (Taal) O'Neill, and brother Bill. We shall all miss him immeasurably. Cremation has taken place under the compassionate care of Kaulbach Family Funeral Home, Bridgetown. Due to current Covid-19 restrictions, there will be no service or funeral. A private family gathering will take place at a later date when his ashes will be interred alongside his parents and brother Bill. It is also hoped that we can have a celebration of Ronan's life at a later date when it is easier for family and friends to all get together. Ronan's family would also like to take this opportunity to express their gratitude to all the staff and residents at the Supervised Apartments and the Meadows ARC, Bridgetown for all their love and care shown to Ronan and his family over the years. Your dedication and generosity will never be forgotten. Thank-you also to the doctors and staff at Soldiers' Memorial Hospital for ensuring Ronan's comfort in his last days. If desired, donations may be made, and gratefully accepted, to the Recreation Fund at Meadows ARC, Bridgetown, or charity of choice.
Share Your Memory of
Ronan
Upload Your Memory View All Memories
Be the first to upload a memory!
Share A Memory