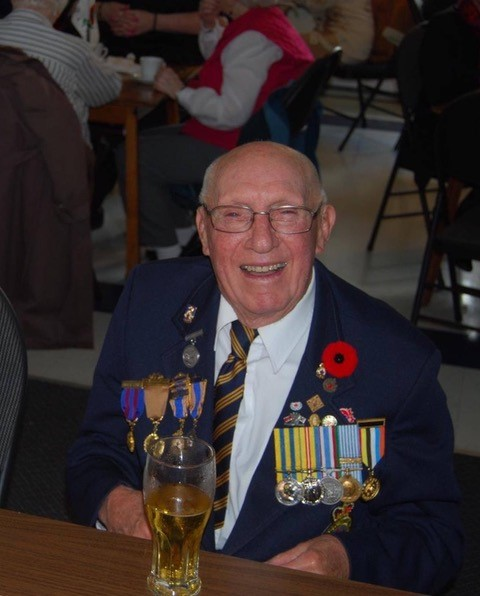 Ernest (Junior) Reginald Saulnier, 87 of Lequille, Annapolis County, passed away on August 14th, 2020 at the Veterans Unit, Soldier’s Memorial Hospital. He was born in Annapolis Royal to Dorothy (nee Young) and Ernest Joseph Saulnier, on March 8th, 1933. He was pre-deceased by his wife, Becky (McGrath), elder brothers, Kenneth (Loraine Saulnier) and Robert (Norma Saulnier). Junior grew up and went to school in Annapolis Royal. He played sports as a kid, mostly ice hockey. He hung out at the ball field and in the rink. He was the stick/bat boy for the Annapolis Tiger’s Sr. Intermediate baseball and hockey teams. At 17, Junior left school, joined the military completing basic training and trades training in Montreal. He joined the Royal Canadian Ordinance Core, stationed at London, ON. He was deployed with the 25th Brigade, travelling by train to Jericho Beach, Vancouver, on to Seattle, Washington meeting their ship, SS Malo sailing to Yokohama, Japan. By train, his troop travelled to Camp Kure, then Camp Hero, Japan. From there flew to Seoul, Korea near the 38th parallel. Following a ceasefire in July 1953, Junior remained in Korea as a Peacekeeper with the United Nations. In 1954, Junior took an honorable discharge later receiving the Peacekeeping Medal for his service. On November 17th, 1956 Junior and Becky were married making Annapolis their home, raising two daughters, Tracy (Mark Terrio) and Andrea (Rodney Phillips). He has four granddaughters, Candice (Evan Dearman), Brandy Edwards, Samantha Turnbull, and Neiley Terrio (Tom Levy). Junior has two great grandchildren, Taylor and Clayton Dearman. Junior worked 37 years at CFB Cornwallis, retiring in 1988. He played drums in various dance bands spending many a Saturday night in local dance halls. Junior was an active member of the RC Legion #21 and held positions on the executive. His favorite was supporting others through Sick & Visiting and the Poppy Fund. He especially enjoyed visiting schools as a veteran, sharing time with students. Junior became a Life Member in 2017. Junior volunteered 6 years with the local Food Bank. A familiar face at Champlain Elementary School, he admired the children’s breakfast program. Junior was an avid sports enthusiast. He bowled & curled at Cornwallis and Bridgetown Curling Clubs, played hockey with Bridgetown RCMP and shot pool at the Legion. These last years he regularly cheered on the Pens, Jays & the Raptors. Junior will be sadly missed by his family. He enjoyed family get togethers’ and happiest when we were all together. He loved a good time with friends, clam bakes, making homemade soup, being with the grand kids and sitting in skuttlebutt lodge spinning tales. Junior was genuine and had time for everyone. He loved his home and spoke proudly of the community with loving memories. The family would like to extend their gratitude to Dr. K Buchholz, Dr. G. Goodine, nurses & staff at Valley Regional Hospital, Annapolis Community Health Center and the Veteran’s Wing, Middelton. At his request, a private dedication will take place at another time. Donations in memory can be made to the ACHC Palliative Care Unit, a local Food Bank or Branch 21’s Poppy Fund. Online condolences may be sent to www.kaulbachfamilyfuneralhome.com
Share Your Memory of
Ernest
Upload Your Memory View All Memories
Be the first to upload a memory!
Share A Memory