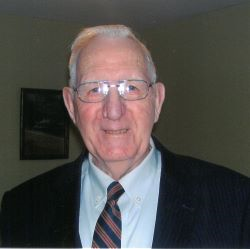 Edward “ED” Halliday, 89, of Bridgetown, Annapolis County, passed away on April 2, 2020, at Soldier’s Memorial Hospital, Middleton with his wife at his side. Born in Hillsburn, on September 7, 1930, he was the son of the late Morland and Lydia (Milbury) Halliday. He held many positions in his life time such as working in the woods in the north of Manitoba; handyman in Saint John; farmer in Alberta; Gows Home Hardware in Bridgewater; a water pump distributer and installer both in Bridgewater and Bridgetown. He loved attending jams and took part in singing country and western songs. Ed loved to sing and was a member of a country and western show, which aired on the South Shore, for 14 years; a member of the Happy Wonderers Choir for a number of years and also sang in the church choir. Ed often liked to pack a lunch to go on an adventure never knowing where the road would take him. He is survived by his wife, Ina (Marshall) Halliday; children, Barbara Goreham, Hal (Jane) Oliver and Krista Oliver; grandchildren, Jesse, Tim, Shea, Brett, Samantha, Craig, Nickolas, Lucas and Jacklyn; great grandson, Tyler; brothers, Kenneth and Alton; sister Wilma Chute. He will be missed by his beloved dog, Peaches. He was predeceased by his first wife, Sylvia; brothers, Leigh, Claire, Percy, Ronald, Ross, Reggie and Rodney; sisters, Geraldine Difford, Lottie Gregory, Elsie McNutt, and Helena Longmire. Due to the recent COVID-19 outbreak restriction a private graveside service will be held Tuesday April 7 at 2PM, at Hillsburn Cemetery, with Rev. Eugene Foster officiating. Donations in Ed’s memory can be made to a charity of one’s choice. Special thanks to Dr. Goodine, Doctors and Nurses at Soldiers Memorial Hospital and V.O.N. On line condolences may be made by visiting www.kaulbachfamilyfuneralhome.com
To plant a tree in memory of Edward "Ed" Halliday, please visit Tribute Store
Services for Edward "Ed" Halliday
There are no events scheduled. You can still show your support by planting a tree in memory of Edward "Ed" Halliday.
Visit the Tribute Store
Share Your Memory of
Edward "Ed"
Upload Your Memory View All Memories
Be the first to upload a memory!
Share A Memory
Plant a Tree