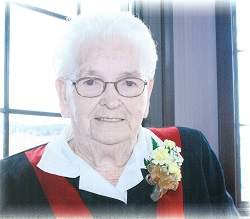 It is with heavy hearts that we, the family, announce the passing of our mother/grandmother/ great grandmother, Vera Louise Burnie, 89, of Annapolis Royal on February 16, 2020. She was the daughter of the late Ralph and Edna (Everett) Hamilton. Mom was one of ten children, and was brought up in Litchfield where she lived and went to school. After our family lost our home as a result of a fire in 1956, we relocated to Parker's Cove. Mom was a hard worker all her life and loved to knit, quilt and socialize with people. She also loved county and gospel music and spent many hours daily listening to it. At age 16, she was employed as a waitress at a local restaurant in Annapolis Royal. Mom also worked in fish plants and loved to go to the Farmers Markets to sell her crafts. Mom was a resident for 17 years at the Cedar House Seniors Complex in Annapolis Royal. Mom is survived by her daughter, Diane (Ricky) Hall; sons, Shannon (Lily), Jimmy, David (Angela) and Kenneth (Susan); grandchildren, Dana (Sandra) Hall, Ronda Lewis (Kennie), Roger, Benjamin (Marianne), Emily (Aaron), Martina, Michael, Julian, Sarah (Matthew) Dares, Sally (Blake) Franklin, Stephanie (Robert) LeFurgey, Brandon and Racheal; several great grandchildren, which she loved dearly. She is also survived by two sisters and three brothers. She was predeceased by grandson, Darren Hall; three brothers and one sister. As mom's health was deteriorating, the last six months of her life, she was dearly cared for by Colleen and Gordon Bragg, Moschelle. Many thanks to Dr. Buchholz, whom Mom cared for dearly, for his compassionate care in her times of need. Thank you to the nurses and staff of the Annapolis Community Health Centre for their care. Arrangements are under the care and direction of the Kaulbach Family Funeral Home, Annapolis Royal. Funeral service will be held 2pm Wednesday February 19, 2020 in the First United Baptist Church of Annapolis Royal, with Rev. Dr. Elizabeth Legassie officiating. Burial will follow in the Litchfield- Delaps Cemetery. In lieu of flowers, donations may be made to the Litchfield Union Church or the Litchfield Delaps Cove Cemetery. Online condolences may be made at www.kaulbachfamilyfuneralhome.com
To send flowers to the family or plant a tree in memory of Vera Burnie, please visit Tribute Store
Wednesday
19
February