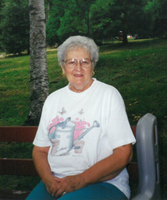 Smith, Joyce Louise – 91 of Bridgetown, passed away peacefully April 20, 2022 in Mountain Lea Lodge where she resided for almost 3 years. Born in Brighton, June 06, 1930, she was the daughter of the late Alice (Gibson) Sproule. Joyce was the matriarch of her family. A perfectionist who had a specific place for all things; a worrier who worried about everything; and an exceptional mother, who’s family was the most important thing in her life, and she gave up so much for them, which they will forever be indebted to her for. Joyce was very tenacious and strong willed through her illnesses, and pushed herself to keep fighting, which gave her family a few extra years to spend with her. In her younger years she enjoyed playing sports, but as she grew older she began to watch them more on TV; Curling, golfing and her favorite Montreal Canadiens. She was an avid bird watcher, and animal lover, always having a furry companion by her side, including the cats at the lodge who took up residence in her room. Joyce lived a life well lived, whether it be at her family home, or the beloved family cottage at Milbury Lake, which she and Donald took much pride in, especially the flower gardens they won many awards for. Joyce liked to have things done to full potential, and not subpar, she could be often heard saying “No point to do it, if you’re not going to do it right” Joyce is survived by her loving family, son, John (Rowena); daughter, Sherry (Don “Tex” Robinson), both of Bridgetown; beloved granddaughter, Chloe; sisters, Meredith (Kenneth, predeceased) Hebb, Linda Saltzman; brother, John (Sandy) Sproule; Special niece, Anne Lynn (Curtis) MacIntyre; Special friend, Hilda (Greg) Smith, of NFLD; several nephews, cousins, and extended family. Besides her mother, she was predeceased by her husband, Donald; step father, Ansel Sproule. The family would like to extend a thank you to the Staff at Mountain Lea Lodge, who went above and beyond to provide exceptional care for Joyce and treated her like their own family. Cremation has taking place under the care and direction of the Kaulbach Family Funeral Home, Bridgetown. As per Joyce’s wishes, there will be no visitation or funeral service. A private family service will be held at the later date. Donations in Joyce’s memory may be sent to CAPS or a local animal shelter. Online condolences may be made at www.kaulbachfamilyfuneralhome.com