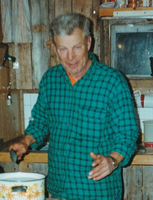 Obituary for Eugene Laurier Kennedy It is with great sadness that we announce the passing of Eugene “Gene” Kennedy. Gene passed away at the young age of 84 on December 18, 2021 at the Mountain Lea Lodge in Bridgetown, NS. Born in Tiverton, NS on October 17, 1937, he was a son of the late Norman Kennedy and Evelyn (VanTassel) Kennedy. Gene lived an adventurous life, mostly always on the move travelling throughout Canada during his younger years. Active in sports, such as playing hockey on the Leaf’s farm team & of course golf! Golf took him many places in life and was likely his favourite thing in the world, along with hunting and his homemade hooch! Fueled often by liquor & cigarettes, he always looked to have a good time & maybe even get in a battle or two. As a proud member of the Digby Sports Hall of Fame, the owner of 100's of golf championships & 9 career hole in one's, you could definitely say he was an athlete who thrived under competitive pressure. As much as he would never admit, he loved his brother & they spent a lot of time together, often fighting, but that's just what they did! He loved his kids, though he didn’t always know how to show it. He tried to make up for it by spoiling his only grandson, often with golf clubs or other valuable life lessons! When his Mom Evelyn got sick, he packed up and moved from Alberta back to Digby, NS where he lived out his years in the family home alongside the ocean and the Digby Pines golf course, operating a small pro shop and golf cart storage business. His grandson Tyrone hopes to carry the torch with some hole in ones of his own when he's a little older and spends more time out east. Gene enjoyed FaceTime with his Grandson and Great Granddaughter before his passing & will forever be remembered for the role he played in moulding the family & his unbeatable skills on the golf course!! His worst golf game … was everyone else’s best! Eugene is survived by his Daughter Lorie Antony (Lorne), Son Bruce Kennedy (Lisa), Grandsons Tyrone Kennedy-Bush and Brandon Kryska and Great Granddaughter Allison Kennedy-Bush Eugene was predeceased by his parents, infant brother Allison Outhouse and brother Donald Kennedy. Funeral arrangements have been entrusted to Kaulbach Family Funeral Home, 385 Granville St. Bridgetown, NS. A graveside service will be held 1pm Thursday, December 30, 2021, in the Woodlawn Cemetery in Digby, NS with Rev. Jeff White officiating. Current Covid-19 Restrictions Apply. Proof of Vaccine, Identification and Masks are required. Donations in memory can be made to the charity of your choice. Share a memory or leave an online condolence at www.kaulbachfamilyfuneralhome.com