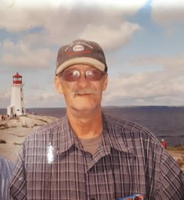 Marshall, Glenn Eugene – 63 of Bridgetown passed away at home December 16, 2021, following his short battle with cancer. Born April 23, 1958, in Middleton, he was the son of Gloria (Swinimer) and the late Dennis Marshall. Glenn grew up in Clarence on the family farm and graduated from Community College with a certificate in electronics leading to his first job in Dartmouth before moving West to Alberta to work on the oil rigs. After a few years, Glenn returned to Nova Scotia and his love for motorcycles led him to pursue a career in small engine repairs and he worked for local repair shops in the Bridgetown area. He earned the nickname “Doc” as his reputation in engine repair became known throughout the Annapolis Valley. In the early 1990’s, Glenn set out on a new path and wanted to upgrade his training so he went to the Nautical Institute (NSCC) in Port Hawkesbury where he would go on to graduate as an Apprentice Rigger and work at the Halifax Dockyard. Due to an unfortunate accident, he did not finish his Apprenticeship. Glenn turned to his mechanical skills and started working at the Purcell’s Cove Marina. Glenn considered Shad Bay his second home and the friends he met in the area led to many exciting opportunities like working on movie sets in Newfoundland including “The Weight of Water” and the “Shipping News”. Glenn brought his unique mechanical skills to the set to keep things working but it was his easy-going personality and sense of humor that led to many interesting interactions with the many stars of the films. He had a great love for music, and even found himself playing in the band “Hightides” from time to time. Glenn made many good friends with his travels with the band and loved being part of the jam sessions and rehearsals. Glenn had always wanted to live out his life on his family farm, which he did. He continued working on small engines from his garage and working on boats in the Shad Bay area. He had a big heart and was always surrounded by friends. Glenn was always ready for the next adventure that life would bring him. He is survived by his mother, Gloria, of Halifax; brother, Mark (Melissa), Fall River; one niece (Ashleigh) and three nephews (Ryan, Dylan and Braden). He was predeceased by his father, Dennis, and his sister, Susan. Glenn’s family would like to give a special thanks to the VON nurse, his doctors and especially his close friends Steve Kiley, Steve Olscamp, Freda Veinot and his cousin Jay Marshall who took special care of him during his illness. Cremation has taken place under the care and direction of the Kaulbach Family Funeral Home, Bridgetown. A graveside service in Bridgetown will be held later. Donations in Glenn’s memory may be made to the VON Annapolis Valley or a charity of choice. Online condolences may be made at www.kaulbachfamilyfuneralhome.com *** A graveside service will be held 2pm June 25, 2022, in Riverside Cemetery, Bridgetown. Following the Graveside there will be a Celebration of Life at the Bridgetown Fire Hall 3-5pm, the family welcomes all to attend. ***