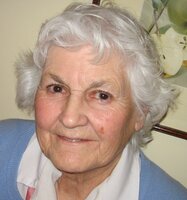 BLISS, Thelma Marie (b. Smart, m. Connolly), September 12, 2021, aged 92 Born on March 6, 1929, in Jhansi, India, daughter of the late Major John William Smart (British Army) and Leah Mary Carvalho. Thelma is survived by her children Jane (Peter), Andrew (Rita), Gregory (Lynn), Christine (Pierre), Anthony (Tara), Adam (Tanya) and her daughter-in-law Jocelyn; also, her grandchildren Alexandria (Luke), Mitchell (Emmalee), Liam, Peter (Anabel) and Christie (Sean); also, her great-grandchildren Sebastian, Gabriel, Jacqueline, Victoria, Peter and Christopher Nicholson, and Nico Pangia. She was predeceased by Gerald F. Connolly, the father of her children; her second husband Roland K. Bliss; her son James and her only sibling, brother Gerald (Frances). Thelma was schooled at St. Mary’s Convent in Naini Tal, a hill station in the mountains, northeast of Delhi. In 1947, as a consequence of the partition of India and the end of the British Raj, she moved with her parents and brother to London, her father’s birthplace. There she met Gerald Connolly, whom she married in 1949. In 1956, with four children under the age of six, they emigrated to Canada and Thelma arrived at Pier 21 in Halifax in February, 1956. She and Gerald went on to have three more children before their divorce in 1969. Thelma was the kind of person who could turn a rag into a party dress, a three-pound chicken into a feast for nine people, an old bureau left on the side of the road into an antique. She was all about transformation, including that of her own life. She and her second husband Roland enjoyed their days as flea market dealers, finally moving from Ontario back to Nova Scotia in 1993 where they bought an old farmhouse in Lakeville, King’s County, and opened an antique store. They both loved the hunt, a practice Thelma continued after Roland’s early death from cancer. In 2017, Thelma reluctantly gave up her old farmhouse and its charms and moved to Annapolis Royal to be closer to her daughters. She surrounded herself with her favourite things and enjoyed many friendships, most especially with neighbour Dave Oakey, with whom she played many a game of Scrabble! She never gave up her love of India, her birthplace, which she visited frequently in her 70s, and she never gave up the search for the next “treasure”. The family would like to thank all those who kept in touch with Mum since her move. Joyce Morton and the ladies at the Lakeville WI; the Tim Hortons gentlemen who always made her feel flirty; special friend Phil Coldwell; and her new friends in Annapolis Royal, especially her beloved Dave Oakie. Mum was especially pleased to have gotten Dave interested in antiques! Many thanks to her neighbour Mark Magill for setting up her birdfeeder and giving her endless pleasure in watching the finches who gathered there. Thanks also to her “other side” neighbours Jeanine Comeau and Rita Ernestson, and to all those in Fortier Mills who took an interest in her well-being and came to her birthday teas. Special thanks also to Tina, Celeste, and Linda at the Salvation Army Thrift Store in Bridgetown; to Fritzi at Clementsport Antiques and to Carla at Green Barn Antiques. Mum surely did love to hunt for treasures! Finally, our most sincere thanks to Dr. Ken Buchholz, Mum’s family doctor; Faye MacDougall, her “breakfast friend” over the last year; and the lovely ladies of the VON. Mum could not have been in better hands. In keeping with her wishes, Thelma has been cremated. There will be a family service next summer. Should you wish to make a donation in her memory, please consider the Annapolis Royal Food Bank, the Salvation Army Thrift Store in Bridgetown, or the Lakeville Women’s Institute. Online condolences may be made at www.kaulbachfamilyfuneralhome.com