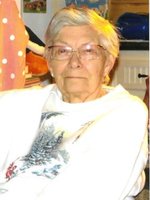 Francis, Mary Lilian – The family of Mary Lilian (Goldie) Francis sadly announces the passing of their beloved mother, at the age of 93, on January 30, 2021, in Mountain Lea Lodge, Bridgetown. Born in Caversham – Reading, England, April 8, 1927, Mum was the daughter of the late Bernard and Irene (Dyson Cooper) Goldie. Raised in Saint-Jouan-des-Guérets, Brittany, France, she was schooled at the Convent of Our Lady of Sion, London and, during World War II, at Acton Burnell near the Welsh border. Following the war, she emigrated to Canada with her parents and siblings, settling on Vancouver Island. Mum had served three years as a radar technician with the WRNS in England and then joined the Royal Canadian Air Force, where she worked in the same field. It was while stationed in Chatham, New Brunswick that she met our dad, Vincent Francis. Mum and Dad married in 1955 in Duncan, B.C. After Dad’s final posting in Cold Lake, Alberta, they drove across the country to settle into the Francis family home in Bridgetown, one young one in tow and a second on the way. In due course we grew to a family of eight. Mum was a devout Catholic and very involved in St. Alphonsus Catholic Church and ladies’ auxiliary. She was also an active member of the Royal Canadian Legion Branch 33, and volunteered in a number of other capacities. Always active, Mum was legendary for her presence at the early bird swim at the Bridgetown Pool. Until her 90th year, she swam laps every morning, working towards her goal of 50 per day by the end of summer. She walked everywhere. She was an avid gardener and, in our younger years, spent many hours preserving fruits and vegetables. She was the queen of recycling and composting long before it became mainstream. Mum was the last surviving member of her immediate family. She is survived by her sons, Peter (Susan), Milford, Michael, Carleton Corner; daughters, Mary-Pat (Terry) Morash, Enfield, Elizabeth Dunik, Fall River, Teresa (Blair Robinson), Halifax, Jennifer (John Ray) Lawrence, Clarence; grandchildren, Jennifer (Keith) Cantfell, Christopher Morash, Arielle Francis (Tobias Stock), Lillian and Clara Lawrence; great-granddaughter, Hazel Cantfell; sister-in-law, Shirley Goldie. Besides her parents, Mum was predeceased by our dad, Vincent W.L. Francis; siblings, Michael, Veronica and Charles. The family will be forever grateful for the loving care provided by Saunders Rest Home and Mountain Lea Lodge, where Mum spent her final years. Due to the current COVID restrictions, there will be a private family service held at St. Alphonsus Catholic Church, with Father John MacPherson officiating. Burial will follow in the church cemetery. Family flowers only. Donations in Mary’s memory may be sent to St. Alphonsus Catholic Church, the Bridgetown Food Bank, or a charity of one’s choice. We will miss Mum’s yummy rolls, her ability to make Christmas perfect, her patience and her recollections of her childhood. Goodnight, God bless.