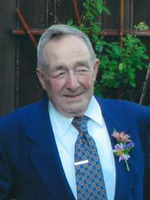 Kay, Frederick Eric – 93, of Hillsburn, passed away June 13, 2020 in the Palliative Care unit in the Annapolis Community Health Centre, with his daughter Bonnie by his bedside. Born November 28, 1926, in Hillsburn, Freddie was the son of the late Addie Etta (Nee Hamilton) and Frederick George Kay. Freddie’s formal schooling was brief and eventful, but his real education began when he left home, tender in years, for a life of adventure and daring on the high-seas; beginning with the Digby – Saint John ferry: the SS Princess Helene. From the Saint John metropolis, it was straight into the Merchant Marine and the 2nd World War: adventure aplenty for the most adventurous. Although travelling to the ends of the earth: London, Liverpool, Naples, Venice Gibraltar, Tunisia, the Canary Islands, and lots of places you’ve never heard of, the world was his oyster: or in Dad’s Case, his scallop. Perhaps that explains why, in his later years, his stern reluctance to go anywhere; he’d already been everywhere. Of course Saint John was his “home-port” and that is where, on a city bus he met, ardently courted, and married the love-of- his-life, his beautiful Ollie. And then, before she could catch her breath, spirited her away to the wild excitement of Hillsburn with the usual result: Terry, Kevin, Bonnie, and Brent running wild, secure in the love of two people whose love for each other ensured our own happiness. Captain Freddie toiled mightily to keep several old scallop draggers afloat but to no avail, before fetching-up at the American Air Base in Happy Valley, Goose Bay Labrador. Our first family adventure. The real true North strong and free! Then came the boat-building. First the ‘Bonnie and Brent’, which Dad fished all over the Bay of Fundy, from Digby to Westport to Halls Harbour to St. Andrews, and all points in-between. When that vessel came-to-grief he embarked on his piece-de-resistance, his pride and joy; the ‘Scotia Voyager’. Together Daddy and Raymond Longmire spent many days and long evenings crafting the model of their vision and then tracking down the best timber to craft this into the perfect Scalloper. Thirty-two years on the ‘Scotia Voyager’ continues to fish. Dad’s grandson, Cpt. Stephen Kay is now in the wheelhouse. After ‘retirement’ from the fishing industry, he jumped right back in , this time at the retail end; supplying fresh seafood to restaurants’ dining rooms, hotels, and a few select private customers (who were also friends). He had a regular route from Saint John right through to St Andrews – St Stephen. Then he leased a building right at the end of the wharf in St Stephen, opened a fresh seafood market, and then, in the front of the building a take-away food service. The fishcakes, potato salad and coleslaw were top of sales. Dad’s fishcake recipe and hand cut coleslaw; Mum’s potato salad. He was an absolute stickler for quality and The Haddock King was a roaring success: a real partnership, dad taking care of the fishy end, and mom keeping the books. Finally her secretarial and accounting skill were paying off, big time; she wrote all the Cheques! After 10 years, Dad decided to ‘retire’ from his sixth enterprise (Yes I’ve been counting). Finally, the Old Man was home from Sea. His days now spent growing good things from the earth, and trying to convince Mum to bottle everything, endlessly. Dad was also a talented chef (to say cook, just seems, well, wrong). When he was home he cooked: every Christmas, every Easter, every Thanksgiving and when he came home for good, a big ‘proper-cooked’ supper every night. Mum truly loved having this live-in chef; her own caveat; ‘I love your Fathers’ cooking, but does he have to use every single pot in the house?’ Well, yes, that’s what a chef does. What they don’t do is wash dishes. When Dad was cooking he was truly happy and therefore everyone else was too. Will we ever forget Dad’s Stuffed oven baked halibut, wrapped in home-cured bacon, smothered in onions? The kippers, sill fragrant and warm from Dad’s smokehouse? The scallops, so fresh they’re quivering, trying to pull their missing shells back together? We will not. Left to mourn his death, but more importantly, to celebrate his life, we express our gratitude for the great gifts that are legacy to us. Survived by his children, Terry, Kevin, Bonnie (Glenn) Griffin, and Brent; his four grandchildren, Heidi (Shane Boutiler), Ryan (Natasha Boyce), Stephen (Amber) Kay, Terri-Lynn (Norman Angel); his ten great grandchildren; his two great great grandchildren; sisters, Eleanor DeWolfe, Erma Hallett, and Doreen Scott. Freddie was predeceased by his own true love, Olive Mary (Nee Bonney) on Nov 28, 2007; and his brother, Winslow. Dr. Buchholz, who has shared Dad’s journey with us, mere words can never express our thanks. We will always remember his loving compassion in every aspect of Dad’s care, who was never unavailable, and often visited Dad in the evening at home. Dr. Buchholz is a Saint, who walks among us. The excellent caregivers (supplied by the Dept. of Veterans Affairs). They are truly heroes. They were there every single day, caring for Dad from when he got out of bed in the morning until he got back into bed at night. Their enthusiasm, loving compassion, and tender care. Special thank you to, Carrie Harrison, Tammy Selig, Destinee Reay, Delane Benoit-Walker. Cremation has taken place under the care and direction of the Kaulbach Family Funeral Home, Annapolis Royal. Due to the ongoing Covid 19 restrictions, a Celebration of Life and a Committal Service will be held at a later date. Donations in Freddie’s memory may be sent to Atalanta Hospice Society. Online at: stlazarus.ca/Acadia/atalantahospicesociety or mail a cheque to “The Order of Saint Lazarus with a note in memo to donate to The Atalanta Hospice Society C/O Fred Tufnell, Vice Canncellor of Finance, Order of St. Lazarus, Grand Priory Canada P.O. Box 187 Schomberg ON L0G 1T0. Online condolences may be made at www.kaulbachfamilyfuneralhome.com