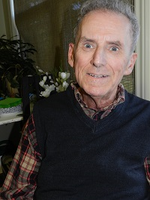 O’Neill George William – “The sun of our memories never sets” and the sunset of March 12, 2020 was beautiful, providing a lovely memory of someone who left us too soon. George William O’Neill, known as Bill, age 71 passed away at Mountain Lea Lodge, Bridgetown, surrounded by loving family attentive staff. Bill was the eldest son of the late George O’Neill and Elizabeth (Bep) O’Neill. He was born in Tatamagouche and was schooled there to age of 12. His family then moved into Halifax where he continued his schooling, graduating from QEH, then on to study and graduate from NSIT and eventually the College of Geographic Sciences. Bill had various jobs before joining SKF, a Swedish bearing firm, covering Atlantic Provinces as their sales representative. While with SKF, Bill accepted a foreign service contract and he and his wife, Bliss, moved to Holland for two years. While there, Bill’s work took him to many European countries, USA and South America. Upon returning to Canada, Bill and his wife settled in his wife’s family home in the Annapolis Valley where they ran Cherry Hill B&B for a few years. Bill was a proud member of the Bridgetown Lions Club, having served one term as their Club President and one time Volunteer of the Year. Bill also served on the Board of the Canadian Mental Health and was a member of the Order of Good Cheer. Bill loved to travel and he and his wife were able to see a great deal of the world, but he was always glad to be home near his family. They eventually sold Cherry Hill and moved to their retirement home on Sand Lake, Annapolis County. The surrounds of the lake and woods gave Bill many hours of pleasure and lead to much of his writing – children’s stories, short stories and poems. His love for his grandchildren lead to him writing three children’s books- “Groancrackle – The Friendly Sand Lake Monster”, “Quill – Groancrackle Takes a Lady” and “I’m a Blue Jay, OK?” Bill battled with depression and anxiety most of his life and at age 69, the addition of dementia meant he no longer able to live at home. So he entered Mountain Lea Lodge where he was loved and cared for by the most amazing staff. He will be remembered there for his loving hugs, easy smile and the occasional bits of humour. Bill is survived by his wife of 37 years, Bliss FitzRandolph, sons, Michael (Christy) and Sean (Meagan) and grandchildren, Dagen, Erin, Hayden and Brooklyn, Kieran and Adeline. He is also survived by brothers, Bob (Dave), Brent (Nancy) all of Halifax and Ronan of Bridgetown. Also surviving, his first wife Carol (Gene) who remained a close friend. Cremation has taken place under the care and direction of Kaulbach Family Funeral Home, Bridgetown and there will be no funeral or visitation at Bill’s request. There will be a Celebration of Life at a later date. Donations in Bill’s memory may be made to Mountain Lea Lodge, Recreation Department, Alzheimer’s Society of Canada or Lion’s International – Dog Guide program. Bill’s family would like to thank the wonderful staff of Mountain Lea Lodge who lovingly looked after Bill during his stay there. They became his family. In his shadow box outside his room was this poem that he wrote. “A Life With a View” Looking out, up, ahead and around Seeing beyond the horizon. Looking here, there, everywhere Seeing light before dawn. Looking near, far and in between Seeing night by light of day. Looking in, down or seeing your own reflection Seeing more than you’ve ever imagined. Give me a life with a view. Bill O’Neill