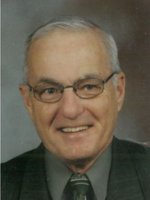 James Douglas Campbell (March 3, 1939 – March 5, 2020). James (Doug as he was known by his friends and family) passed away with his loving family by his side. He was the son of the late Alice (Vaughn) and Archibald Campbell, Brantford Ontario. James was a man of great kindness, a beautiful soul, a beautiful mind, a beautiful spirit. He served in the Royal Canadian Navy from 1957-1972. On retiring from the service he went into the retail grocery business – he managed the IGA store in Antigonish and went on to act as councilor for IGA in New Brunswick and Nova Scotia. In 1991 James realized his dream and purchased the Annapolis Royal IGA, retiring in 2000. While living in Dartmouth the Campbell family worshipped at the Wyndholme Christian Church, where James and Donna served as elders. Wherever James and Donna lived they always found a church family to worship with often serving as elders. God was very important to James. In the last 25 years James and Donna worshipped at the Parker’s Cove Baptist Church with the very loving church family there. James, along with his daughter formed the first Beaver Colony under the Boy Scout movement of Canada at Wyndholme Christian Church. He continued to work with Boy Scouts until 1991. Always volunteering, James worked with the Food Bank and Meals and Wheels in Annapolis. Besides his family, James greatest love was music. In the middle of July, he could be heard singing “O Holy Night”. He sang with the Dukes of Kent Barbershop Chorus in Kentville for 27 years. For several years, James and his buddies would travel from Annapolis to Kentville to sing with the chorus. James and his barbershop friends had a quartet in Annapolis called The Messengers. James leaves to mourn his wife of 59 years, Donna, his three children of whom he was most proud – Kimberly (Derek) Carter, Derrick (Sandra) Campbell, Mark Campbell; 5 grandchildren who he adored, Christopher, Emma (Jonathon) Sproul , Hilary Carter (Nick Blackmore), Courtney (Ben) Taylor, Cole Campbell. Brother Cameron (Marlene Campbell), Sister Mary (Thomas) Douglas sister in law, Maureen Nauss. James was predeceased by his parents, Archibald and Alice Campbell, brothers Kenneth and Robert Campbell, brother in law Thomas Douglas. The family extends our heartfelt and deep appreciation to the Palliative Care Team – especially Caroline Creen and the many loving nurses, Pastor Mark Elley, Dr. Kenneth Buchholz, and all of the wonderful support given by our many friends – meals, visits, love, prayer, and cares. We are blessed. A celebration of life to be held at Parker’s Cove Baptist Church, Monday March 9th 2:00 p.m., officiated by Pastor Mark Elley. Reception immediately following at the church. Family burial only. Family flowers only please. If you wish to honour James, donations may be made to the Palliative Care unit in care of the Annapolis West Health Foundation or the Annapolis and Area Food Bank. Online condolences may be sent to www.kaulbachfamilyfuneralhome.com